No. 7 Cincinnati take big playoff swing at No. 9 Notre Dame 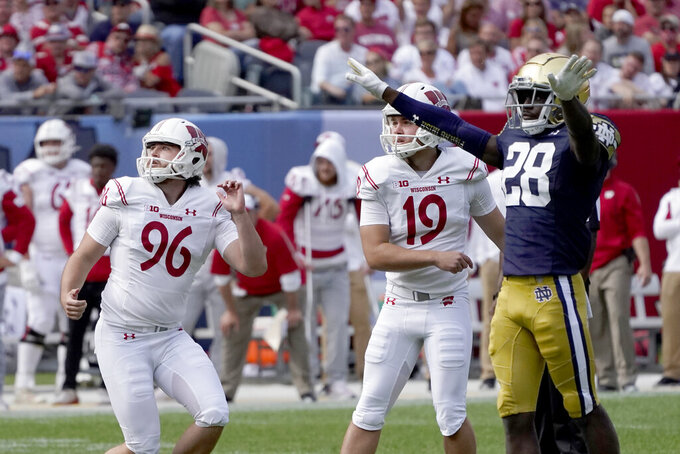 Line: Cincinnati by 1 1/2, according to FanDuel Sportsbook.

The Bearcats' College Football Playoff hopes. How real a shot Cincinnati —- or any school outside the Power Five — has to be selected for the playoff is questionable. The American Athletic Conference has unbeaten champions such as the Bearcats last season, that didn't even come close. However, a victory against highly ranked Notre Dame might open the door a crack for Cincinnati.

Notre Dame defensive coordinator Marcus Freeman, formerly with Cincinnati, vs. Bearcats QB Desmond Ridder. Freeman was considered a big get in the offseason by the Fighting Irish. His defense wasn't so impressive against Florida State and Toledo, but coach Brian Kelly mentioned after the victory against Wisconsin that Freeman had added some wrinkles that helped the Irish shut down the Badgers. Freeman should know the Bearcats' tendencies and how Ridder is most comfortable operating. How will the senior quarterback and Cincinnati offensive coordinator Mike Denbrock, a former Kelly assistant, respond?

Cincinnati: CB Ahmad “Sauce” Gardner. The preseason All-American is one of the main reasons the Bearcats are holding opposing quarterbacks to 44% completions, best in the country.

Notre Dame: S Kyle Hamilton. Another preseason All-American leads the Irish with three interceptions and is second in tackles with 24. Ridder and the Bearcats like to take deep shots and that's where Hamilton often roams.

The Irish have allowed 20 sacks, 129th out of 130 FBS teams. ... Cincinnati has four sacks in three games. ... Cincinnati has two victories against top-10 opponents all-time: No. 7 Rutgers in 2006 and No. 9 Wisconsin in 1999. The highest-ranked opponent the Bearcats have beaten on the road is No. 14 Pitt in 2009. ... Notre Dame has won 26 straight home games. ... Kelly coached at Cincinnati from 2006-09, going 34-6 and earning a Sugar Bowl bid his last season before coming to Notre Dame. ... Irish QB Jack Coan left the game against Wisconsin last week with what appeared to be a left ankle injury. Kelly said if Coan was healthy he would remain the starter. Coan was listed atop Notre Dame's depth chart this week.