No. 9 Michigan tops Indiana 29-7, bounces back from 1st loss 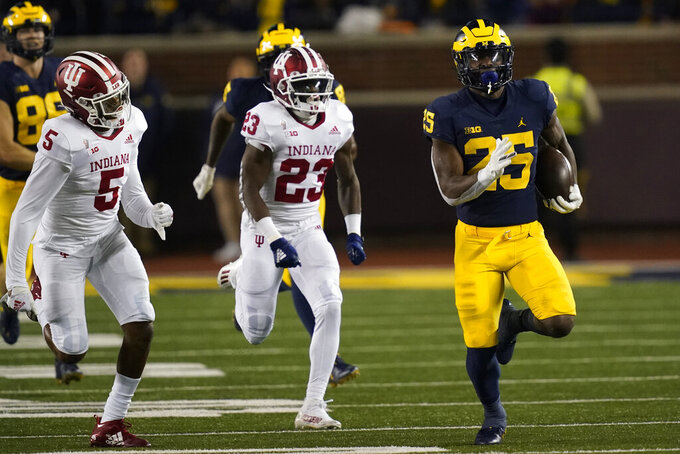 Michigan running back Hassan Haskins (25) breaks up field for a 62-yard rush during the first half of an NCAA college football game against Indiana, Saturday, Nov. 6, 2021, in Ann Arbor, Mich. (AP Photo/Carlos Osorio) 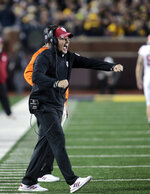 ANN ARBOR, Mich. (AP) — Hassan Haskins had to carry a heavier burden in the backfield because Blake Corum was injured. He delivered.

Haskins ran for a career-high 168 yards and a touchdown, helping No. 9 Michigan bounce back from its first defeat with a 29-7 win over Indiana on Saturday night.

“It was a different feeling, but I had to get the job done,” Haskins said.

The Wolverines (8-1, 5-1 Big Ten) were coming off a deflating defeat, blowing a 16-point, third-quarter lead in a 37-33 loss to rival Michigan State last week.

“That's out of our control, but going forward, we said, somebody has to pay and it just happened to be Indiana," Michigan defensive end David Ojabo said.

The fifth-ranked Spartans lost for the first time this season earlier in the day, 40-29 to Purdue, and fell into a second-place tie with Michigan behind No. 6 Ohio State in the Big Ten East Division.

The Hoosiers (2-7, 0-6) have lost five straight games, collapsing in a season that started with them hoping to contend for at least a division title.

“Our expectations were high in the beginning, and this isn’t what we expected,” linebacker Micah McFadden said. “So, it hurts.”

Haskins had 27 carries, matching a career high, without Corum on the field for much of the game. Corum, who has been among the nation's leading rushers all season, ran once for 4 yards and dropped a perfect pass in the flat for the second straight week before leaving the game.

Cade McNamara was 10 of 18 for 168 yards with two touchdown passes to Luke Schoonmaker that helped the Wolverines pull away. The tight end took advantage of opportunities with Erick All out of the lineup with an injury. Michigan's Cornelius Johnson had five receptions for 108 yards.

Indiana’s latest loss makes them ineligible for a bowl, ending its chances of playing in three straight postseasons for the first time since the late 1980s.

“There’s a lot of tears in there,” coach Tom Allen said. “But there’s also a whole lot of resolve in there, guys who gave a whole lot to this program and have a lot of character themselves.”

“There were times where he looked like a true freshman, but there were also times he’s playing well in a tough situation,” Allen said. “So there’s no question, he wasn’t expecting to be our starting quarterback this week, but that’s a tough environment.”

Indiana: Losing quarterbacks Michael Penix Jr., who threw for 342 yards and three touchdowns in last year's 17-point win over Michigan, and Jack Tuttle to injuries has been too tough to overcome for Allen's team.

“I just have to learn from the process and keep getting better," McCulley said.

Michigan: Corum's injury is a potential problem. He and Haskins have allowed Harbaugh to stick with a run-heavy offense. If Corum is out, Haskins will take many more hits and there isn't a lot of experience behind him on the depth chart. Backup running back Donovan Edwards was out with an injury.

The Wolverines may not move up because the only team ranked higher, Michigan State, beat them last week.

Michigan has won 40 of 42 games against Indiana, who ended a 24-game losing streak with a 38-21 win over the Wolverines during the pandemic-shortened season.

Ojabo forced a fumble on a sack, giving him eight sacks and four forced fumbles to rank among FBS leaders in both categories.

“He has a knack for it,” Harbaugh said. "It’s something you really have to account for, his ability to rush the passer. That’s an issue. We see it in practice with Aidan (Hutchinson) on one side and David Ojabo on the other.”

Indiana freshman running back Trent Howland, who had five carries for 17 yards in one game this season, sat out the first of two games after being suspended for violating team rules.

Michigan: At No. 22 Penn St on Saturday.