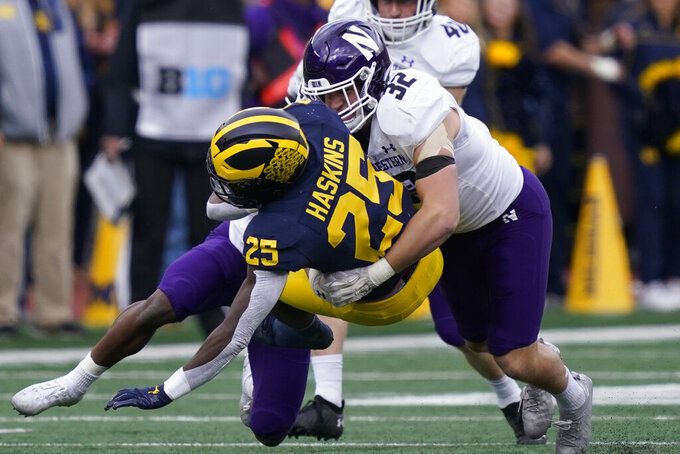 EVANSTON, Ill. (AP) — Two season-ending injuries at running back have not derailed Minnesota's season thanks to a talented freshmen duo and a powerful offensive line.

The Golden Gophers won their third straight game last week, piling up 326 yards on 56 carries against Maryland. The game plan probably won’t change against Northwestern, which is last in the Big Ten in rushing defense (allowing 218 yards per game).

Ky Thomas led the Gophers in rushing with 139 yards on 21 carries and Mar’Keise Irving ran for 105 yards on 15 carries in the win against Maryland. Both are freshmen.

“I am really impressed with their backfield," Northwestern coach Pat Fitzgerald said. "You are down quote, unquote, your top two backs but I don’t think that matters. There are three guys right now that are playing at a very high level.”

The backs have picked up the momentum left by Mohamed Ibrahim and Trey Potts, who had their seasons end early due to injuries. Minnesota coach P.J. Fleck said playing freshmen comes with risks.

“Now, you’d love to have tons of data to show you what they really do in game situations so you can really have that data from whether it’s spring, or whether it’s in-season, you’d like to have a little bit more of that before guys get on the field,” Fleck said.

As young as they are in the backfield, Minnesota makes it up with a veteran offensive line.

“I think they have like 500 starts between their offensive linemen,” Fitzgerald said. “They’re on the same page every play. You don’t see them making a whole lot of mental mistakes.”

“We’ve known each other for a long time. Got a lot of respect for the job he does," he said. "We’re going to have to play really clean football to put ourselves in a position to compete in the game.”

The Gophers have been praising the work by running backs coach Kenni Burns, who also carries the title of assistant head coach, to help the freshmen seamlessly step into such prominent roles after the injuries to Ibrahim and Potts.

“He’s been with me an awful long time and is a huge part of our program and our culture, and he’s doing a fabulous job with those guys,” Fleck said.

Burns was on Fleck’s staff at Western Michigan before joining him at Minnesota in 2017.

“All we’ve been talking about is just getting better every single day,” Burns said. “We’ve got a veteran offensive line, some veteran tight ends, and all we’ve got to do is just keep getting better and catching up to them and doing our job and this thing will work itself out.”

Wide receiver Chris Autman-Bell, one of 13 Illinois natives on the roster for the Gophers, smiled this week as he described “battling” with Irving, center John Michael Schmitz and the other Illinoisans to claim tickets for family members planning to attend the game.

“It’s always fun to go back to your home state,” Autman-Bell said.

With a win on Saturday in Evanston, Minnesota would start the season with a 3-0 road record for the only the fourth time since 1961.

Ryan Hilinski replaced Hunter Johnson as the Northwestern starting quarterback in week three. In four games as the starter, Hilinski is 69 of 121 and has thrown for 725 yards with 3 touchdowns and one interception, which came in last week’s loss to Michigan.