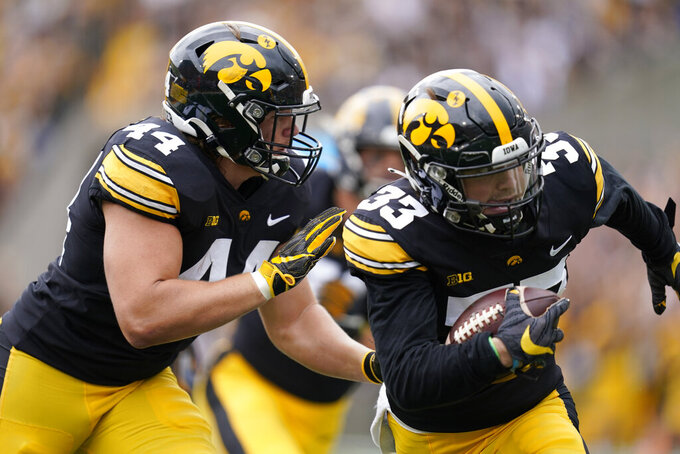 Iowa defensive back Riley Moss (33) returns an interception 30-yards for a touchdown during the first half of an NCAA college football game against Indiana, Saturday, Sept. 4, 2021, in Iowa City, Iowa. (AP Photo/Charlie Neibergall)

Things to watch during Week 2 of play in the Big Ten Conference:

This is the most anticipated Cy-Hawk game since the series began in 1884. ESPN's College GameDay will be in Ames for what marks the first time both teams will enter the game ranked. The Hawkeyes have won the last five meetings and, following their dominant win over Indiana, are looking to beat a fifth straight Top 25 opponent for the first time since 1960. Iowa State got out to its usual slow start in a 16-10 win over FCS member Northern Iowa, but has played fantastic defense, holding its last six opponents to a total of 16 second-half points.

Ohio State defense vs. Oregon offense. The third-ranked Buckeyes played a lot of defenders against Minnesota, a sign the coaching staff is still auditioning young and untested players. Even though No. 12 Oregon is still trying to get comfortable with new starting QB Anthony Brown, the Ducks still should be more dynamic than Minnesota. The 1-2 punch of RBs CJ Verdell and Travis Dye will be a handful.

Besides Oregon-Ohio State, there's a Big Ten vs. Pac-12 matchup with Washington visiting Michigan. There have been 537 football games between the conferences, including the Rose Bowl and other postseason games, and the Pac-12 holds a 267-258-12 edge. No conferences have had more games against one another. Purdue beat Oregon State 30-21 last week in the first Big Ten-Pac-12 matchup. There'll be another Sept. 18 when Minnesota visits Colorado.

Buffalo goes into its game at Nebraska as a 13.5-point underdog, according to FanDuel Sportsbook. The Bulls have a new coach and some new personnel at key spots, but they played in the MAC championship game a year ago and won't be intimidated by an opponent that lost to Illinois and struggled with Fordham for a quarter-and-a-half.

Minnesota's Trey Potts is next man up at running back following the season-ending injury to Mohamed Ibrahim. The Gophers love running backs capable of hammering away at a defense's front seven. Potts has averaged 5.7 yards per carry in eight career games. He'll be going against a Miami (Ohio) defense that allowed 247 rushing yards, and 8 yards per carry, to a top-10 Cincinnati.