Take 2: Oregon, Utah meet again with Pac-12 on the line 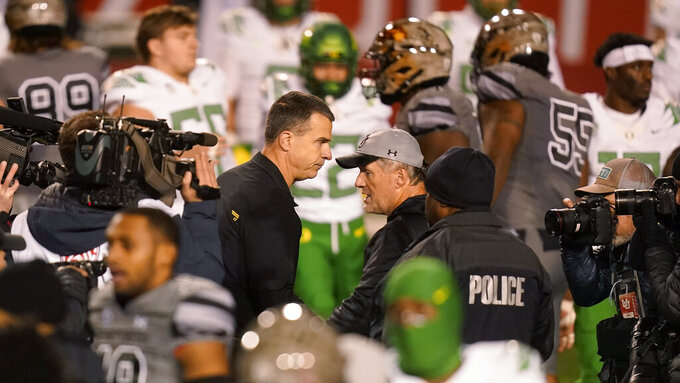 Just 13 days after Utah knocked Oregon out of contention for a College Football Playoff berth, the two teams meet again to decide the Pac-12 champion.

The winner of Friday night's game in Las Vegas will be going to the Rose Bowl on New Year's Day.

Don't expect any wholesale changes for the No. 14 Utes (No. 17 CFP) just because it's a title game against a recent opponent, coach Kyle Whittingham said. More likely Utah will stick to what worked this season, especially when it comes to preparation and mechanics.

"Not a lot of things have changed with either team in eight days or nine days, but really, it’s the execution, the energy and that type of stuff that’s more critical than any minor schematic adjustments that you make,” Whittingham said.

The Utes have had an emotionally tumultuous season.

Utah started the season 1-2, losing in their third game to San Diego State. The Utes won their next game, the conference opener against Washington State, before tragedy struck: defensive back Aaron Lowe was shot and killed at a party in Salt Lake City.

The team rallied, winning all but one of its remaining games — including the 38-7 victory at home over the then-No. 3 Ducks on Nov. 20. The Utes concluded the regular season last Friday with a 28-13 victory over Colorado.

The Utes (9-3, 8-1) have appeared in the Pac-12 title game three times, but have never won the title. Utah has also never played in the Rose Bowl.

Oregon (10-2, 7-2) is playing in its third consecutive Pac-12 championship game. The Ducks have won the last two titles — including a 37-15 victory over Utah in the 2019 game. No team has won three straight since the league expanded.

While Oregon, now ranked No. 10 in both the AP poll and the CFP rankings, largely knows what to expect from Utah, the fact that it's a championship will bring with it greater urgency.

But mostly the Ducks want to make sure that very recent history doesn't repeat itself against the Utes.

Oregon's Anthony Brown Jr. leads the Pac-12 with an average of 264.8 yards of total offense per game, with 16 touchdown passes and nine TD runs. Against Utah, he threw for 231 yards and a touchdown, and was held to just 8 yards rushing.

Utah's Cam Rising is equally mobile with 17 touchdown passes and five rushing scores. He has thrown only three interceptions this season.

Whittingham addressed chatter that he might retire at the end of the season, particularly if the Utes win the Pac-12 title and a first-ever Rose Bowl berth.

Whittingham, in his 17th season with the Utes, shot down the rumors.

“I'm not even contemplating that right now,” he said.

The title game will feature brothers on opposite sides: Oregon's Noah Sewell and Utah's Nephi Sewell.

Noah, a linebacker, was injured in Oregon's 38-29 win over Oregon State last weekend but should be available for the game. Nephi also plays at linebacker for the Utes.

The pair are the younger brothers of Penei Sewell, who played for the Ducks and is now an offensive tackle for the Detroit Lions. Another of the talented Sewell brothers, Gabe, played at Nevada.

Tavion Thomas ran for 94 yards and three touchdowns against Oregon less than two weeks ago as the Utes clinched the Pac-12 South and secured their spot in the championship game.

Brown threw for 231 yards and the lone touchdown for Oregon, which trailed 28-0 at the half. Oregon rushed for only 63 yards and had just 294 yards of offense.