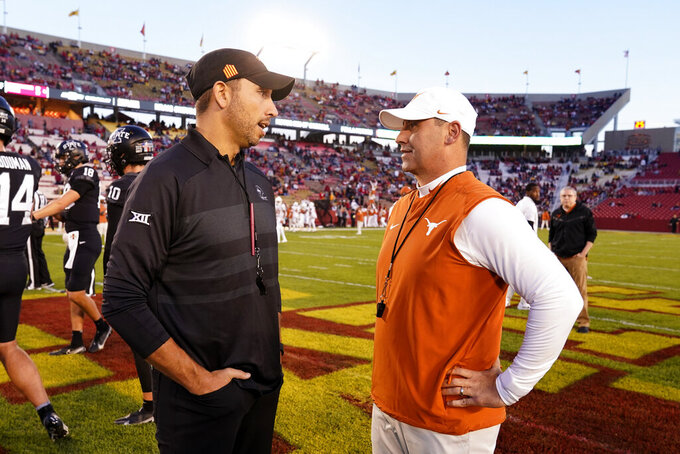 AUSTIN, Texas (AP) — Mired in a four-game losing streak, it would seem things couldn't get much worse for Texas and first-year coach Steve Sarkisian.

Lowly Kansas is next on the schedule. But lest anyone need reminding, it was a loss to the Jayhawks in 2016 that sealed former coach Charlie Strong's fate and he was fired less than a week later.

Texas needs to win two of its final three games to avoid a losing season and get to a bowl game. Texas hasn't lost five in a row since 1956.

There's no serious talk of firing Sarkisian in the first season of six-year, $34 million guaranteed contract. But even Strong, who had three consecutive losing seasons, never lost four consecutive games and Longhorns fans may be checking out until 2022 with basketball season starting up and the men's team ranked No 5 in the preseason.

Sarkisian was hired after Tom Herman was fired despite four winning seasons and four bowl wins. He inherited a program that finished 2020 ranked in the AP Top 25.

Sarkisian's “All Gas, No Brakes” motto said that he was here to turbocharge the program. This wasn't about rebuilding an engine on a team that started the season ranked No. 21.

But that wasn't the message being put forth on Monday, when Sarkisian compared Texas (4-5, 2-4 Big 12) to an old “classic car” that needs more than new coat of paint.

“We’re under the hood, we’re fixing the engine, we’re working on the interior. And when this thing’s done, we’ll put the nice fresh coat of paint on it," Sarkisian said. “We’re under the hood right now working on a lot of things that we think need to get worked on, whether its schematically, whether it’s culturally and whether its individual players’ development. Ultimately the car is going to look shiny and good.”

Texas confirmed that veteran wide receiver Joshua Moore had left the team and will transfer. Moore reportedly had a dustup with the coaching staff last week, but he played in Texas' 30-7 loss at Iowa State.

Moore was Texas' top returning receiver from 2020 but struggled this season as freshman Xavier Worthy became a breakout player. Moore had just 24 catches with three touchdowns and made two critical errors in a loss to Baylor with a dropped touchdown and a fumble.

“We wish him the best of luck,” Sarkisian said.

There's more to fix at Texas than one roster change.

Sarkisian said he's not sure who will start at quarterback against Kansas. And topping it off, star running back Bijan Robinson left the game with a neck injury and Sarkisian said Monday he didn't know yet if he will be ready to play this week.

On paper, Kansas (1-8, 0-6) is just the opponent Texas needs to break its losing skid. The Longhorns are an early 30-point favorite. But the Jayhawks nearly beat Oklahoma just three weeks ago. Then Texas has a road trip to West Virginia before closing out the regular season at home against Kansas State.

The Longhorns need wins in two of those games. They haven’t missed playing in the postseason since 2016, Strong’s final year.

“Nobody likes where we’re at. I wish we were undefeated too,” Sarkisian said. “I do think there is incremental progress that is happening.”

Texas fired national-championship winning coach Mack Brown after the 2013 season because the school felt the program had become stale and second-tier in the Big 12. Since Brown left, Texas is 52-44 under its third head coach.

Fourth-year defensive lineman Moro Ojomo compared this season to trying to plug a leaking water tank with multiple holes. He noted Texas has been trying to patch the tank over the 12 years since the Longhorns last won the Big 12 and played for the national championship.

Texas has lost at least four games 11 times since then. The exception was a 7-3 finish in the pandemic-shortened 2020 season that got Herman fired.

“I don't know what happened from '09, 2010 that, like, just started this whole decade," Ojomo said. “Something got loose, a screw almost. We've been forever been trying to find which screw” to fix.