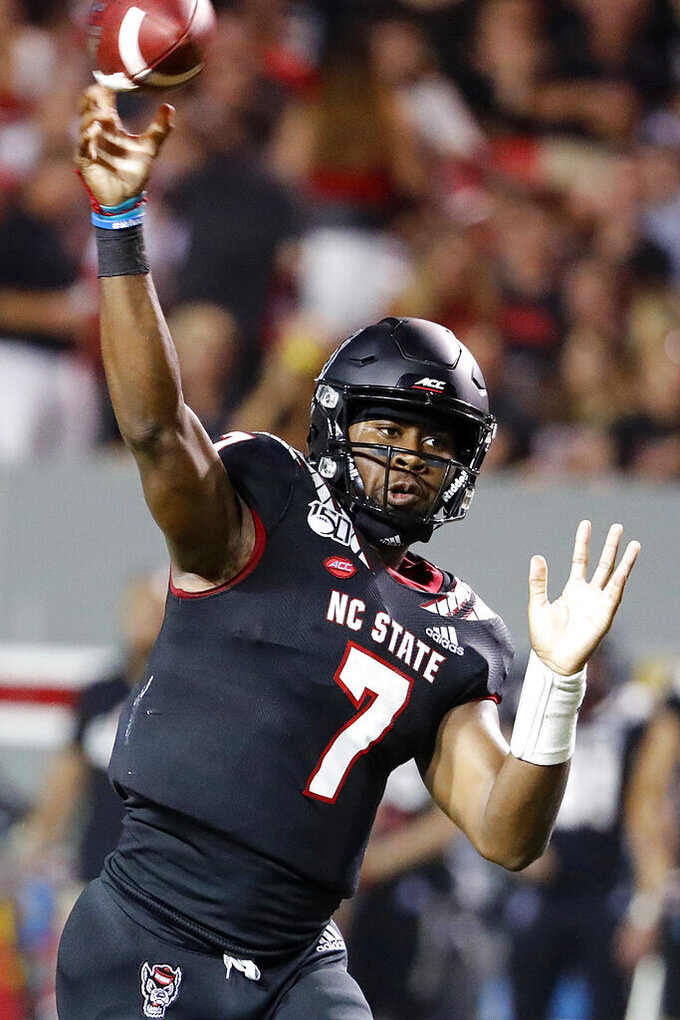 North Carolina State's Matthew McKay (7) throws the ball during the first half of an NCAA college football game against Ball State in Raleigh, N.C., Saturday, Sept. 21, 2019. (AP Photo/Karl B DeBlaker)

RALEIGH, N.C. (AP) — Thayer Thomas had a 76-yard punt return for a touchdown in the third quarter while Max Fisher blocked a fourth-quarter punt to set up another score and help North Carolina State beat Ball State 34-23 on Saturday night.

Malik Dunlap recovered Fisher's block, putting the Wolfpack at the Cardinals' 7-yard line. Matthew McKay scored on a keeper three plays later at the 8:41 mark to help the Wolfpack stay in control.

"I feel like the special teams the second half really won us the game," Thomas said.

McKay also ran for a second-quarter TD for N.C. State (3-1), which saw its offense slow significantly after halftime. But the Wolfpack turned away the Cardinals' last best push on Chris Ingram's end-zone interception with 3:43 left.

Justin Hall and Caleb Huntley ran for scores for Ball State (1-3), which entered with one of the nation's top passing attacks behind Drew Plitt. Plitt threw for 333 yards but failed to connect for a score for the first time this year.

"We had a couple of opportunities there that we needed to finish the deal," Ball State coach Mike Neu said, "and we didn't get that done."

Ball State: Plitt came into this game ranked fifth in the Bowl Subdivision ranks in passing yards per game (346.7) while ranking tied for third with 11 passing touchdowns. He had some good moments in this one yet couldn't come up with some needed throws as Ball State settled for multiple field goals, while his late interception came after the Cardinals had recovered an onside kick with a chance to increase the pressure on the Wolfpack.

N.C. State: The special teams came up big. Thomas had the biggest play when he took a punt, weaved through midfield and broke into the open for the TD return — N.C. State's first since Nyheim Hines did it at Pittsburgh in 2017, a span of 22 games. Then there was Fisher's block to give the Wolfpack a short field. N.C. State needed all of it, too, considering the offense managed just five first downs after halftime.

Ball State: The Cardinals have an open date next week and return to action at Northern Illinois on Oct. 5.