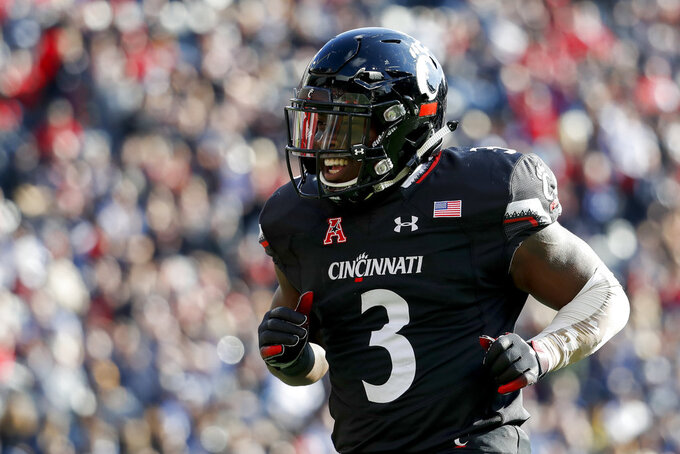 FILE - In a Saturday, Nov. 3, 2018 file photo, Cincinnati running back Michael Warren II celebrates after scoring a touchdown in the first half of an NCAA college football game against Navy, in Cincinnati. Virginia Tech (6-6) must defeat Cincinnati in the Military Bowl on Monday, Dec. 31 to avoid its first losing season since 1992.(AP Photo/John Minchillo, File)

ANNAPOLIS, Md. (AP) — A strange season filled with uplifting victories and mystifying defeats finally draws to a close for Virginia Tech in the Military Bowl.

After winning their first two games and climbing to No. 13 in the AP Top 25, the Hokies lost to Old Dominion and needed a late surge to earn a bowl bid for the 26th year in a row — the longest current streak in the Football Bowl Subdivision.

Now, Virginia Tech (6-6) must defeat Cincinnati on Monday to avoid its first losing season since 1992.

"It will be something we hit on and talk about," coach Justin Fuente said. "I'm sure it will be part of the reason why our kids will prepare and get ready to play."

Cincinnati (10-2) has plenty of incentive, too. The Bearcats are seeking the third 11-win season in the 131-year history of the program and their first bowl victory since 2012.

Following two straight 4-8 seasons, Cincinnati would like nothing better than to cap the turnaround by beating Virginia Tech.

"I'd love to see the fruits of our labor, not only going to a bowl game but finishing a season in a real historic way," senior offensive lineman Garrett Campbell said.

A bowl bid and a winning season seemed inevitable for the Hokies after they opened with lopsided victories over perennial Atlantic Coast Conference powerhouse Florida State and in-state rival William & Mary. That was followed by an inexplicable 49-35 loss to then-winless Old Dominion, a 29-point underdog.

Virginia Tech improved to 4-2 before dropping four straight by a combined 85 points. Facing two must-win situations to keep their bowl streak alive, the Hokies squeezed past Virginia in overtime and defeated Marshall.

How they perform against Cincinnati is anyone's guess, because practice before the game ran hot and cold. After several crisp sessions on campus, the Hokies looked flat this week.

"I didn't think we were as sharp as we were before we left," defensive coordinator Bud Foster said. "To me that's aggravating because that's kind of been how our season's been, up and down that way."

Some other things to know about the Military Bowl matchup:

This will be the fourth time these teams have met in a bowl game. The rivalry began in the 1947 Sun Bowl (won by Cincinnati) and includes the 2014 Military Bowl (won by the Hokies).

Virginia Tech leads the series 6-5, including a 2-1 edge in bowl games, but the Bearcats are favored in this one.

"There's a reason they won 10 games," Fuente said. "The two games they lost were to very accomplished football teams."

Cincinnati sophomore Michael Warren II ran for 1,163 yards and 17 touchdowns, and caught 24 passes for 222 yards and a score.

"He's got good quickness, good speed, catches the ball out of the backfield. A complete back," Foster said.

The Bearcats pass effectively, too. American Athletic Conference rookie of the year Desmond Ridder threw for 2,359 yards and 19 TDs, including nine to Kahlil Lewis.

Ryan Willis proved to be a capable backup. He has thrown 22 touchdown passes with only eight interceptions and ranked third in the ACC with 227 yards passing per game.

"It speaks volumes about him," Fuente said. "I'm proud of how he's handled it and has improved as the season has gone along."

Cincinnati's defense ranks No. 8 in the Football Bowl Subdivision in yards allowed (289.9 per game) and seventh in points surrendered (16.1).

Senior tackle Cortez Broughton, a first-team all AAC selection, has a team-high 6½ sacks.

Asked his objective in his final college game, Broughton said, "Obviously you want to finish strong, but just come out and have fun."

When Fuente was hired before the 2016 season, he wanted to find a way honor the man he replaced, Frank Beamer. He decided that the top special teams player in practice for the week leading up to a game would don the No. 25 jersey that Beamer wore as a Tech cornerback in the late 1960s.

That number will be worn in the Military Bowl by Coleman Fox, who is on the kickoff and punt units. Fox's father, Rich, played fullback for Beamer at Virginia Tech from 1986-89.