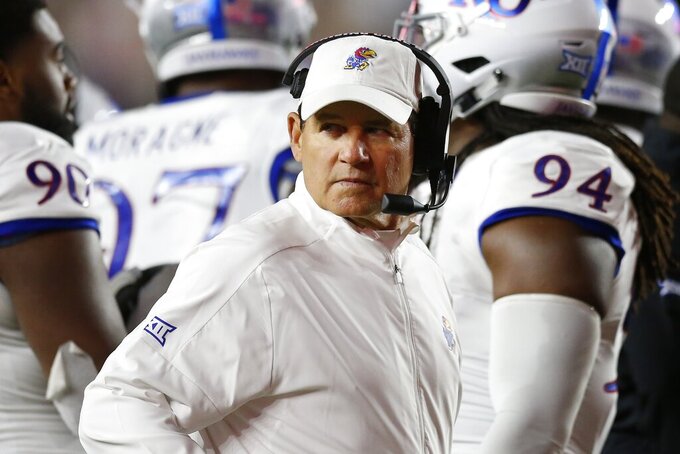 Kansas head coach Les Miles stand swith his team during a timeout in the second half of an NCAA college football game against Boston College in Boston, Friday, Sept. 13, 2019. (AP Photo/Michael Dwyer)

LAWRENCE, Kan. (AP) — Progress can happen rapidly when a new coaching staff is trying to rebuild a football program.

Neal Brown and Les Miles took that notion to the extreme.

After watching West Virginia get dominated by Missouri on the road, Brown spent last week on the sideline as his Mountaineers ran roughshod over North Carolina State. And a week after Kansas lost to lowly Coastal Carolina at home, Miles had the Jayhawks flying high in a win at Boston College.

Two good wins for the Big 12. Two bad losses for the ACC.

Now, the Mountaineers (2-1) and Jayhawks (2-1) begin conference play when they meet Saturday at Memorial Stadium. West Virginia has won eight of nine in the series, though with a pair of new coaches on the sideline — and after the last couple weeks — nobody knows quite what to expect.

"We've got to handle the trip much better than the first away game we had," said Brown, who took over for the departed Dana Holgorsen after a successful four-year stint at Troy.

Well, the Jayhawks have to defend their home field a lot better than last time, too.

"The guys have accomplished to a point," Miles said, "and now it's about the next things we set our sails on doing. I certainly like where we're at and I think our team will really be motivated to do special things. They understand they've done a couple. Now, is there more to it?"

The opener is crucial for both coaches for a couple reasons: They want to keep the momentum going from last year, start the Big 12 off with a bang and they certainly don't want to lose to a team that many pundits consider their biggest competition for the conference cellar.

In the last decade, Kansas has managed just six conference wins. Never during that stretch have the Jayhawks had more than one; their lone victory in 2013 was over the Mountaineers.

"It was a lot of fun to see our hard work and preparation pay off last week," Kansas quarterback Carter Stanley said. "But win or lose, you have to flush it on Sunday. It's a new week and it's up to us to see what we can do with it."

Kansas started last season 2-1, too, but lost eight of its last nine games in another dismal year that ultimately cost David Beaty his job. But the Jayhawks' 48-24 rout of Boston College left them with a sense of progress under Miles, who is no stranger to building a program.

"This year it definitely has a different feeling," Stanley said. "It was a really good feeling how we went out there and executed. It just feels like we're doing what we're supposed to do."

One thing Kansas hasn't had to deal with lately is complacency, simply because the program hasn't had many opportunities to play after a win. But it's not something that Miles is worried about.

Slot receiver Tevin Bush returns to West Virginia's lineup after serving a one-game suspension for an unspecified violation of team rules. The 5-foot-6 junior is the team's second-leading receiver with 95 yards on six catches.

West Virginia has played musical chairs on the offensive line with eight different starters so far. Some of it was due to illness or injury, some because the coaching staff wasn't seeing results. After the Mountaineers struggled to establish the run over its first two games, averaging just 1.1 yard per carry, they ran for 173 in the 44-27 win over North Carolina State.

"I'm proud of our O-line," said wide receiver Sam James, who had nine catches for 155 yards against the Wolfpack. "They fought through adversity, people criticizing them and stuff like that."

Vic Koenning said he didn't find out about the kinship until later in life.

"It's kind of a long story," said Koenning, who knew of Les Koenning when the latter was a wide receiver in the 1970s. They ran into each other years later at a coaching convention.