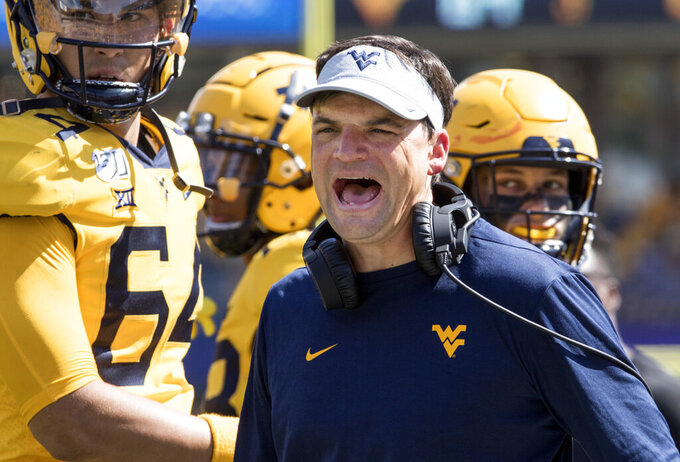 West Virginia is looking for some type of spark as it tries to avoid falling into last place in the Big 12.

A bye week allowed coach Neal Brown to focus on fixing the mistakes and bad habits of a young team without the distraction of preparing for an opponent. Now comes the task of getting the heavy underdog Mountaineers (3-4, 1-3 Big 12) prepared to play at first-play Baylor (7-0, 4-0) on Thursday night.

"I'm not spending a large amount of time on what Baylor's doing," Brown said. "It's not that I don't respect them. I do. I'm not spending any time whatsoever looking at other teams in the league. Because for our football team, we've just got to get better."

West Virginia has lost three straight games and has had to rely on freshmen at many positions with older players either getting banged up or even some leaving the team.

The offense has sputtered behind both a running and passing game that are among the worst in college football. The Mountaineers' 22.7 scoring average is on pace to be their worst since 2001.

Transfer quarterback Austin Kendall is completing 64% of his passes but has thrown seven interceptions and is averaging just 10 yards per completion.

"We've got a lot of people that are playing for the first time, but I think there's a lot of hope," Brown said. "We haven't played very well offensively. I'm not blind to that. I get it. I just want to get better — period."

He no longer uses "freshmen" to describe his new players or the reasons for using them.

"I think it's a built-in excuse," he said. "We're a no-excuse operation. It is what it is. We play a lot of young people. They've got seven games worth of experience. Some of them have got five, some have got six. But they've all played five-plus games, these guys that we're really depending on. And it's time."

The time is certainly urgent. West Virginia must win three of its final five games to become bowl eligible for the sixth straight season. The Mountaineers have failed to reach a bowl just three times in the last 20 years.

"I haven't sat up there and said, 'hey, we've got to stop this streak' or anything like that," Brown said.

Instead, his players were given an extended break during the bye week, and Brown said they returned with "a renewed focus, a renewed energy."

West Virginia entered the month of October with a 3-1 record but then ran into a gauntlet, losing by double digits at home to Texas and Iowa State and to No. 10 Oklahoma on the road.

After Baylor, the remaining games are against Texas Tech, Kansas State, Oklahoma State and TCU. None have a winning record in the league.

Baylor coach Matt Rhule knows all about the growing pains for a first-year coach. Baylor went 1-11 in his first season in 2017, then improved to 7-6 last season.

"Neal Brown and his offensive staff do a tremendous job of keeping you off balance," Rhule said. "Even though they haven't won the last three, they've been close ballgames at halftime. They've been close going into the fourth quarter. I think probably with each week they're getting more and more confidence as they install their system."