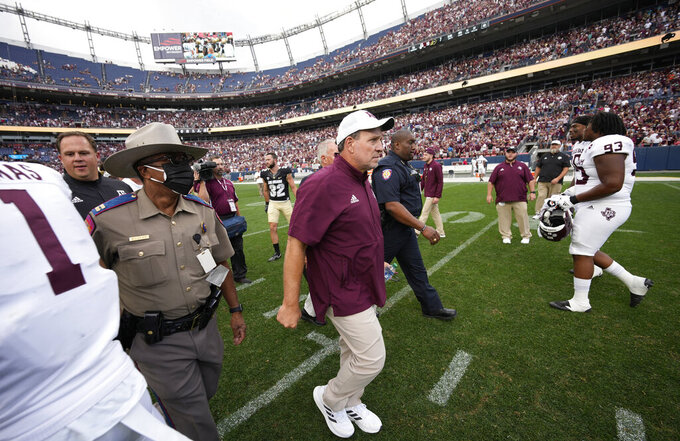 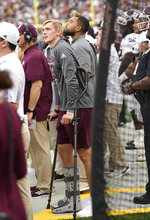 “We’ll feature things he does, but we won’t change a lot,” Fisher said.

Calzada was thrust into the job last weekend against Colorado when King was injured on Texas A&M’s second possession. King had surgery this week to repair a broken right leg, leaving Calzada to start Saturday against New Mexico.

Calzada and King competed for the job throughout camp and Fisher said King had only a slight edgewhen he was named the starter for Week 1.

Calzada had trouble moving the offense against the Buffaloes and lost a fumble near the goal line with about nine minutes left in the fourth quarter. But he rebounded to throw an 18-yard touchdown with 2:41 left to give the Aggies a 10-7 victory.

Fisher believes that the adversity will help Calzada as he moves into the starting role. He was asked what he hopes the sophomore learned from that experience.

“It means that I can,” Fisher said. “The more he played, the more it slowed down. The more he saw it, the more plays he was able to make.”

This game is Texas A&M’s final non-conference tuneup before the Aggies open Southeastern Conference play Sept. 25 against No. 20 Arkansas. They’re looking to extend their winning streak to 11 games and post their first 3-0 start since opening the 2016 season with six consecutive wins.

“We’re going against ... one of the best football teams in the country in one of the hardest environments to play,” coach Danny Gonzales said. “That’s fun. That’s why you do this.”

With Texas A&M’s offense sputtering against Colorado, the defense stepped up to help secure the victory. The Aggies allowed just 54 yards in the second half. While Fisher was happy with the performance, he was disappointed that his defense didn’t play that way the entire game.

“I think they realized the game has to turn up,” Fisher said. “This was a good wakeup call, even for them, why they can’t pick and choose when they take a break, or don’t need to be that intense.”

New Mexico quarterback Terry Wilson has experience playing in front of crowds like the one he’ll face Saturday after playing 25 games in three seasons at Kentucky. Wilson nearly helped the Wildcats upset Texas A&M in College Station in 2018 when he threw for 108 yards and a touchdown in a 20-14 overtime victory by the Aggies.

“Preparation-wise it’s unbelievable,” Gonzales said. “He’s been there. He knows exactly what kind of environment it is. He can explain it.”

Wilson is off to a great start this season and was named Mountain West offensive player of the week this week after throwing for a career-high 382 yards with three touchdowns in the win over New Mexico State. He has thrown for 559 yards and six touchdowns without an interception in two games this season.

Running back Isaiah Spiller had a tough time on the ground against Colorado, managing just 20 yards rushing after running for 113 yards in Texas A&M’s opener. He helped in other ways and had 56 yards receiving and caught the game-winning TD.

“His leadership and his demeanor, how he’s affecting guys, was outstanding in the game,” Fisher said. “I was extremely proud of Isaiah Spiller and the way he played. Then he made the big play to win the game.”