Clemson offensive line confident it could succeed vs Tide 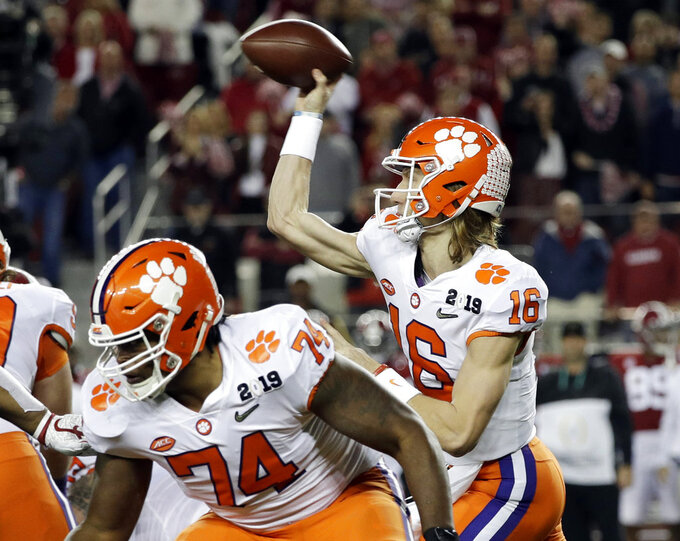 It only got better for the Tigers after that.

The matchup between Alabama's vaunted defensive line and Clemson's offensive line that was projected as a mismatch was indeed one-sided. Only it was the Tigers controlling things up front while the Crimson Tide's defensive line was rendered moot as the Tigers beat Alabama 44-16 Monday night in the College Football Playoff national championship game.

"We felt it on that first drive," Falcinelli said. "We felt like, 'Hey we can move these guys and we can block these guys. We can play with them.' And after that we were like, 'We got this.'"

Alabama went into the game with one of the top defensive lines in the country yet the Crimson Tide barely laid a hand on Lawrence. A split second after throwing his third touchdown pass, Lawrence took a big hit from blitzing Alabama linebacker Anfernee Jennings and stumbled backward but didn't go down.

It was one of the few times the Tide even got close to Lawrence. By then it hardly mattered. Lawrence regained his footing and quickly joined his teammates to celebrate.

It wasn't as if the Lawrence was getting rid of the ball quickly, either. The freshman quarterback repeatedly stood in the pocket and scanned the field for several moments waiting until a receiver found an opening, without so much as a hint of an Alabama defender getting close to him.

"They don't get the credit because of all the skill guys around them," said Clemson assistant offensive coordinator Tony Elliott. "But for us to be a balanced offense, to rush the way we've rushed, to throw the way we've thrown, man, the credit goes to those guys. We're champs because of the way those guys played."

Outland Trophy winner Quinnen Williams, the anchor of Alabama's defensive line who could be the No. 1 overall pick in this year's NFL draft, was not much of a factor. Clemson left tackle Mitch Hyatt and left guard John Simpson double-teamed Williams most of the night and kept him from making much of an impact.

Williams had only three tackles and defensive end Isaiah Buggs had four. No other Alabama defensive lineman had more than two.

It was much the same when the Tigers went to their ground game. Clemson's offensive line got just enough of a push to make room for running back Travis Etienne, who had a pair of rushing touchdowns and scored a third on a short shovel pass from Lawrence.

"I thought if we were going to have an opportunity the best way to defend them is to rush four guys and play different kinds of coverages," Alabama coach Nick Saban said. "When we rushed four guys we didn't get a lot of pressure. Their offensive line did a good job. (Lawrence) was very comfortable in the pocket, had time to throw and we didn't get him covered very well in the back end at times."

As the final seconds ticked off the clock and a shower of orange, white and purple confetti rained down on the field at Levi's Stadium, Simpson knelt with his head in his hand.

"We were super prepared for this game," Simpson said. "A few articles they had that the middle three were the weakness of (our) offensive line. We took it very personal and we were just trying to pound them, pound them and pound them to prove a point.

"Everyone put the game on the offensive line's shoulders. We knew it was going to have to be won in the trenches, and when we did it it was all a big rush."

It was in stark contrast from a year earlier when Alabama's defense had no problem pushing the Tigers' front five around. As Falcinelli put it, "They punched us in the mouth."

This time it was Clemson doing the punching.

"We try to tune out as much as we can but it gets to you," Falcinelli said. "We watched them on film and knew we had some opportunities. We thought we could do it coming in, and just to be able to go out and do it is amazing. After last year everyone was going, 'Oh boy.' This year it was different."