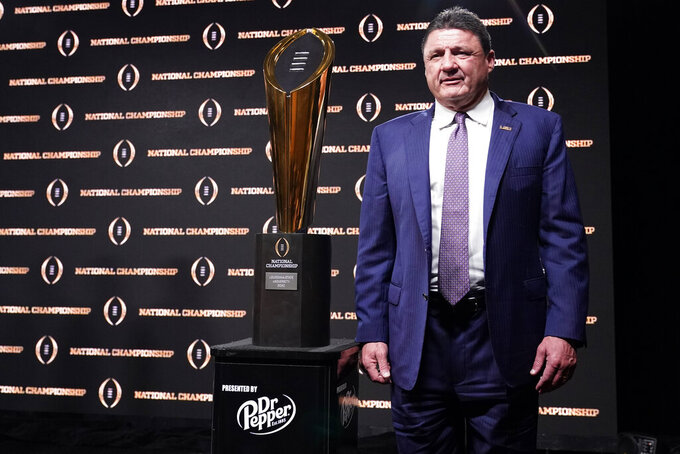 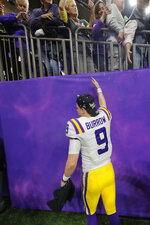 NEW ORLEANS (AP) — LSU coach Ed Orgeron is already thinking about what comes next for his national champions. More specifically, who comes next.

Orgeron and the top-ranked Tigers completed a 15-0 season with a dominating and decisive win over No. 3 Clemson, 42-25, on Monday night.

Heisman Trophy winner Joe Burrow threw five touchdown passes and ran for another. But Burrow, as a senior and the likely No. 1 pick in April's NFL draft, won't return for another championship run.

And he's not the only one.

Receiver Justin Jefferson, tailback Clyde Edwards-Hilaire, safety Grant Delpit and tight end Thaddeus Moss are among several juniors with decisions to make about whether they want to come back for another college season or head to the pros.

“It will be difficult to replace these guys, but you're at LSU so you should be able to do it," Orgeron said Tuesday, about 10 hours after celebrating amid the falling confetti at the Superdome.

Burrow finished with an NCAA record 60 touchdown passes and capped his career by riddling the country's best defense in Clemson, which gave up a season-worst 628 yards. Clemson had allowed only 245 yards a game through the Atlantic Coast Conference championship.

Orgeron would love to have this team back for the 2020 season. But the Tigers go after the nation's best prospects and Orgeron lets them know before signing they probably won't stay more than three years.

“It's something we have to accept," he said. “But this is going to be a tough group to replace.”

Patrick Queen, a junior middle linebacker, led LSU with eight tackles (2.5 of them behind the line of scrimmage) against Clemson. He has until Friday to decide if he'll enter the draft.

Queen said he needs time to talk with his family and his coach before choosing. No matter what he does, Queen is confident this title, the fourth for LSU, is just a starting point.

“LSU is always going to be capable of doing what we did this year," he said. “We've got great fans, great coaches and as long as we believe in each other, we can accomplish anything."

Orgeron called his group a team “for the ages.”

“We didn't have a bad game," he said. “We played 15 good football games and this is going to be hard to beat.”

While the parties stretched from the French Quarter to Baton Rouge and Orgeron's home base in predominantly Cajun south Louisiana, the coach himself said he spent his national championship night eating some Popeye's chicken in the hotel.

Queen, too, stayed in and relished the national title win: “I didn't even party. I was still in shock."

Not everyone will be gone.

Freshman Chris Curry is a tailback who filled in when Edwards-Hilaire got hurt in the SEC championship game and did not play much in the CFP semifinal win against Oklahoma.

Freshman cornerback Derek Stingley, an AP All-American and the SEC newcomer of the year, should lead another fiery, nasty group of Tigers on defense.

Expect LSU to be in the mix next for another playoff berth next season — along with Clemson, already installed by some bookmakers as the team to beat.

For now, Orgeron wants his coaches, players and fans to celebrate LSU's first national championship in 12 years. Classes were canceled Tuesday and a parade is set for Saturday in Baton Rouge.

“We're going to enjoy this," Orgeron said. “But it's a recruiting weekend this weekend, we'll start recruiting and get on to next year.”