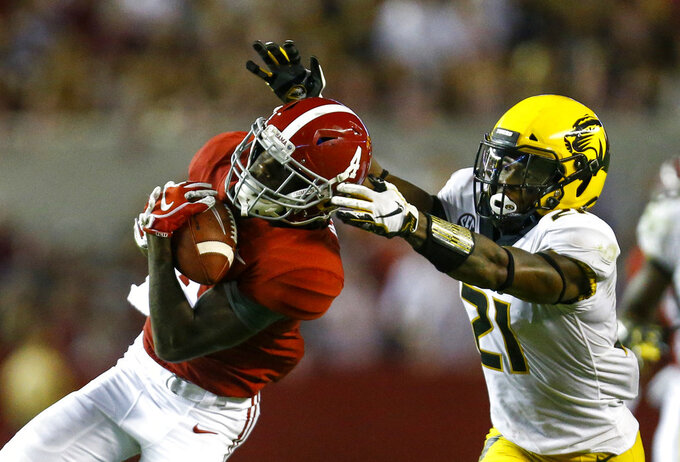 FILE - In this Oct. 13, 2018, file photo, Alabama wide receiver Jerry Jeudy (4) catches a pass over Missouri defensive back Christian Holmes (21) during the second half of an NCAA college football game, in Tuscaloosa, Ala. The sophomore receiver that made the preseason All-America team will be going up against fellow preseason All-America team member Greedy Williams, cornerback at LSU. No. 1 Alabama and No. 4 LSU play on Saturday, Nov. 3 in Baton Rouge, La. (AP Photo/Butch Dill, File)

This will probably be the best Saturday of the college football season.

With four games matching top-15 teams, including No. 1 Alabama at No. 4 LSU, the stakes are high, the story lines intriguing and the playoff ramifications plentiful.

Both Southeastern Conference divisions could be settled if Alabama wins because the winner of No. 6 Georgia at No. 11 Kentucky in the SEC undercard will be East champions.

No. 12 West Virginia is at No. 15 Texas in a matchup of Big 12 contenders. The conference's playoff chances could take a hit if the Mountaineers pick up a second loss. The Big Ten has a similar game at the Big House where No. 5 Michigan tries to stay in prime playoff position against No. 14 Penn State.

Outside the ranked vs. ranked games, No. 7 Oklahoma faces a potentially tricky road test at Texas Tech. No. 3 Notre Dame is at Northwestern, with the Wildcats on a four-game winning streak.

Why wait for the weekend? No. 9 Central Florida hosts Temple on Thursday night in a battle for first place in the American Athletic Conference East. On Friday night, No. 23 Virginia hosts Pitt with first-place in the ACC Coastal on the line. Who would have expected that at the beginning of the season?

No. 10 Ohio State plays its first game since losing to Purdue, with Nebraska (fresh off its first victory) coming to Columbus. No. 15 Utah could just about clinch its first trip to the Pac-12 championship game by beating Arizona State.

There's a lot going on.

The Owls defense is salty, with some NFL-caliber talent such as CB Rock Ya-Sin and DT Michael Dogbe ... TEMPLE 34-30, UPSET SPECIAL.

Upstart Cavaliers can surpass six victories for the first time since 2011 ... VIRGINIA 28-20.

Cardinals look like a team playing out the string for a coach who might not be back next season ... CLEMSON 45-10.

Irish's Ian Book is the first QB to win his first five starts while completing at least 70 percent in each game since Russell Wilson for Wisconsin in 2011 ... NOTRE DAME 31-17.

Third-down conversions have been a problem for the Nittany Lions (35.8 percent, 103rd in FBS); the Wolverines allow 28.7-percent conversions ... MICHIGAN 35-20.

Odd season for the Tigers, who have faced a brutal schedule, lost a couple games they probably should have won and now are scrambling to get bowl-eligible with a possible first-round pick at QB in Drew Lock ... FLORIDA 28-24.

Utes are averaging 6.8 yards per play during four-game winning streak after averaging 4.5 in their three previous games against FBS competition ... UTAH 31-21.

Cougars are the only team in the country to score at least 40 points in all their games ... HOUSTON 45-31.

Mississippi State has allowed the fewest touchdowns in the nation with nine ... MISSISSIPPI STATE 31-13.

Would be good for the ACC and the Orange if Syracuse finishes strong and stays ranked ... WAKE FOREST 35-34.

No. 24 Boston College (minus 2) at Virginia Tech

With Georgia and Alabama still to come, this is a metal health game for Auburn fans ... AUBURN 23-17.

Michigan State (minus 1) at Maryland — @GriffinTSmith

How do the Terps respond to what has been a strange week at Maryland? ... MICHIGAN STATE 24-20.

BYU (plus 13) at Boise State — @LunalNewport

After a good start, Cougars in danger of a second straight losing season ... BYU 34-17.

UCLA (plus 7½) at Oregon — @GoDuckYourself

UCLA coach Chip Kelly's return to Oregon, where he led the Ducks to national championship contention, and it's hardly a footnote this weekend ... OREGON 34-24.

Oklahoma State (minus 8) at Baylor — @tokyotrojan

Miners are the last winless team in FBS and have lost 20 straight overall; Rice's only victory came against Prairie View ... UTEP 24-21.