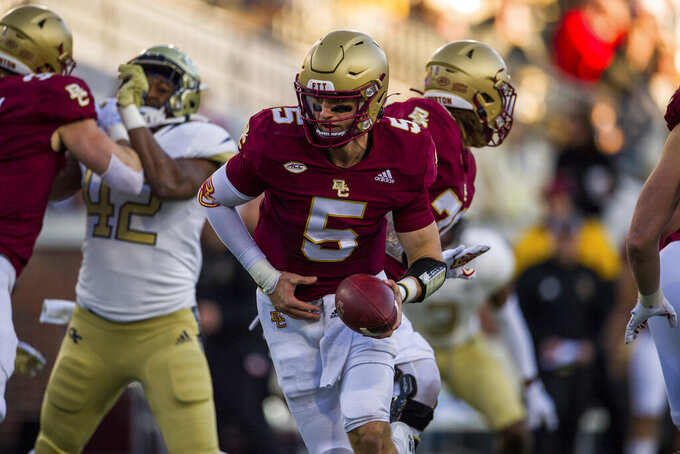 ATLANTA (AP) — Phil Jurkovec appears to have found more speed when he missed six games for Boston College with a wrist injury.

Jurkovec accounted for five touchdowns — running for three and passing for two — and the Eagles beat Georgia Tech 41-30 on Saturday to become bowl-eligible.

“Holy cow, what he did today ... I'm glad he's back,” said Boston College coach Jeff Hafley of his quarterback.

Jurkovec ran for 71 yards, including scoring runs of 8, 14 and 31 yards. He completed 13 of 20 passes for 310 yards. He said he feels lighter, and his teammates have noticed the difference.

“He’s moving way faster than he did before so it might be a good thing, missing a little bit of time,” said wide receiver Zay Flowers, who caught touchdown passes of 48 and 39 yards from Jurkovec in the first half.

“It gave him some speed,” Flowers said. “He may be faster than me.”

Jahmyr Gibbs, who had a 98-yard kickoff return for the Yellow Jackets' first touchdown, scored on a 4-yard run with 8:59 remaining, cutting Boston College's lead to 31-30. Brent Cimaglia's potential tying extra point was no good, bouncing off the right upright, preserving the Eagles' lead.

“It feels good because everybody was calling me fat last year, fat and slow,” Jurkovec said. “I feel good. I feel a lot lighter.”

Georgia Tech (3-7, 2-6) has lost four consecutive games. It closes its season against No. 7 Notre Dame and No. 1 Georgia. The Yellow Jackets will need an upset win to avoid a third consecutive three-win finish under third-year coach Geoff Collins.

“We’re still building this thing,” Collins said. “We’ve just got to find a way, when we get up 21-7, we’ve got to shut the door on people and just keep gaining momentum and gaining ground and not let go of the rope. We can’t relax and let good teams get back into it.”

Quarterback Jordan Yates passed and threw for touchdowns in his fourth start of the season as Jeff Sims was held out with an undisclosed injury.

Jurkovec returned last week to lead the Eagles to a 17-3 win over Virginia Tech.

Boston College: Jurkovec's return has revived the Eagles' season. The junior's dual-threat skills were the difference for most of the game. Boston College's defense took the lead in the second half, first making a stand near its goal line to force a field goal and then stopping a long drive with Jason Woodbey's interception at the Eagles' 3. Pat Garwo had 24 carries for 104 yards.

Georgia Tech: Defensive woes continue to plague the Yellow Jackets. Georgia Tech began the day ranked 11th in the conference and 109th in the nation in pass defense, allowing 267.7 yards per game. Jurkovec had 237 yards in just the first half. The Yellow Jackets gave up 505 total yards, the fourth game in which they've allowed at least 500. The Yellow Jackets' lost season was reflected by a small turnout on a sunny day.

Georgia Tech drew 11 penalties for 95 yards. One penalty cost the Yellow Jackets a player in the fourth quarter. Linebacker Ayinde Eley was called for targeting and ejected following a helmet-to-helmet hit on running back Alec Sinkfield.

The Eagles celebrated becoming bowl-eligible. “Now we’ve got to go to a good one,” Hafley said. “We have that in our control and we’ve got to keep getting better.”

Gibbs ran for 96 yards and a touchdown in addition to the kickoff return for a touchdown.

Hafley said the plan was to kick away from Gibbs — who he said was “the most explosive guy we’ve played all year” — the entire game. He said subsequent short kickoffs that looked like onside kicks were instead squib kicks that were mishit.