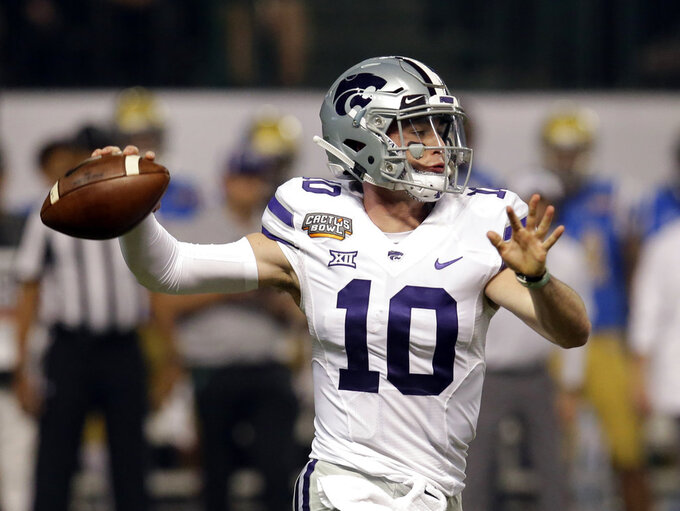 FILE - In this Dec. 26, 2017, file photo, Kansas State quarterback Skylar Thompson (10) throws down field against UCLA in the first half during an NCAA college football Cactus Bowl game, in Phoenix. Kansas State begins the season against South Dakota on Saturday night. The Wildcats return both of their starting quarterbacks and their entire offensive line, not to mention Hall of Fame coach Bill Snyder. (AP Photo/Rick Scuteri, File)

MANHATTAN, Kan. (AP) — Bill Snyder thought he knew who had won the tightly contested race between Skylar Thompson and Alex Delton to start at quarterback when Kansas State opens the season against South Dakota.
Then the 78-year-old coach watched another practice, and the same nip-and-tuck competition that Thompson and Delton waged all last season — and resulted in both of them playing plenty of snaps all the way through their bowl game — was back to all-square.
"It's unimaginably tight in regards to who is doing the best," Snyder said. "I thought I had the answer, and I started to move in that direction. It's like that old adage, 'You think you got it, but just wait a day.' And I did and that's what happened. I'm not sure yet."
Two things are certain, though: One of them will start and the other will play.
"I'm committed to that. Both of them will be on the field for a substantial amount of time," Snyder said. "But it's something that I still have to wrestle with. If the decision goes much longer, it will be based on both of them stepping onto the field and then kind of depending the situation."
Whomever takes the first snaps will do so behind an offensive line that returns entirely intact, and is anchored by All-American candidate Dalton Risner. And with a skill-position group that includes bruising running back Alex Barnes, there should be plenty of talent at his disposal.
"Both quarterbacks, we've had so much time with. I've had them for years," wide receiver Zac Reuter said. "We have chemistry with both. I think we're in great shape with whoever is playing."
Maybe they are against South Dakota, a school from the Football Championship Subdivision that went 8-5 and reached the second round of the playoffs last season. But with No. 18 Mississippi State visiting the next week, Snyder would likely prefer a clear-cut starter at quarterback.
"Our offensive line and everybody else is comfortable with either one of them," he insisted. "They both have had the same amount of repetitions and it doesn't get any different from one to the other.
"Everyone wants to say, 'Well he does this, and he does that,'" Snyder said, alluding to the fact that Thompson is a better passer and Delton more athletic. "But they both do the same things."
COYOTES QB
South Dakota lost record-setting quarterback Chris Streveler to graduation — he's playing in the Canadian Football League these days — which means Austin Simmons will take over. He'll be doing so without the help of Michael Fredrick, the Coyotes' leading rusher two of the past three years, who moved to cornerback because of a lack of depth at that position.
"Austin's had a good preseason camp. Continues to get better every day," South Dakota coach Bob Nielson said. "I think the game continues to slow down for him as he sees more and more in practice, and he's going to be a guy that continues to get better.
SIDELINE EXPERIENCE
Nielson began his coaching career in 1989, the same year Snyder arrived at Kansas State. Most of his work has been at small colleges, but he's nevertheless compiled an impressive record of 198-92-1 with a pair of national titles at Minnesota-Duluth.
FIELD EXPERIENCE, TOO
The Coyotes' two-deep roster includes eight starters on each side of the ball that started last season, and played crucial snaps in an upset of Bowling Green. They are led by All-American defensive end Darin Greenfield and all-Missouri Valley safety Andrew Gray.
"There's a different energy," Nielson said. "The guys are excited to gear up for Kansas State."
ADAMS' FAMILY
The Wildcats' defense struggled mightily after safety Kendall Adams went down with a season-ending injury to his Achilles tendon last season. He was back in time for camp and Snyder said he'll be on the field Saturday.
"He's a great leader and enforcer, and as a linebacker it makes you feel a lot safer knowing he's right behind you to clean up anything you might miss," linebacker Sam Sizelove said. "He's so knowledgeable. He's going on his fourth year starting, I think. It's been great to have him back."
NEW COORDINATORS
Kansas State shuffled its coaching staff after last season, losing both of its coordinators. Andre Coleman has taken over the offense with help from Collin Klein and Charlie Dickey, and Blake Seiler is handling the defense with an assist from Brian Norwood.
"We're doing a lot of stuff differently," Barnes said. "Just the fire and intensity that (Coleman) has each and every day, he's really a fireball and that's something that we feed off."
___
More AP college football: https://apnews.com/tag/Collegefootball and https://twitter.com/AP_Top25