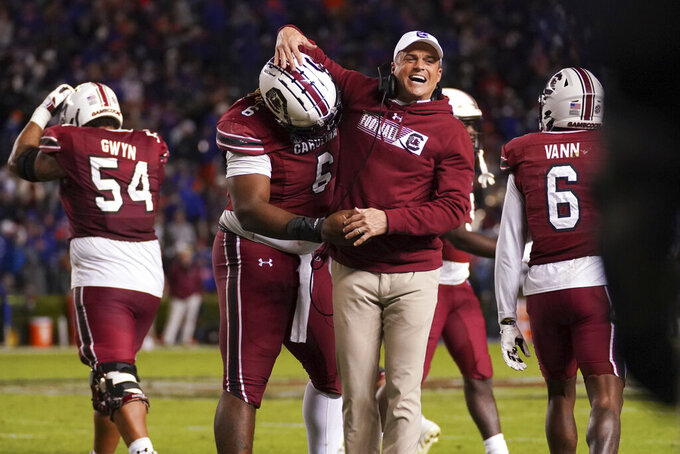 Missouri and South Carolina have been mirror images of each other for much of the season.

Both of them were blown out by Tennessee and Texas A&M but played Kentucky tough in a loss. Both have played three different quarterbacks due to injuries, forcing each of them to lean on their star running backs.

The Tigers and Gamecocks are both eyeing a bowl game, too, heading into their matchup Saturday at Faurot Field.

“A great night the other night against Florida," South Carolina coach Shane Beamer said, “but that's over. It's behind us. What are we going to do about it? We need to continue to progress as a football team. We did some good things but by no means have we arrived. We did a lot of good things but we did not play well in a lot of areas.”

Beamer's assessment from a 40-17 romp over the Gators sounds a lot like Missouri counterpart Eli Drinkwitz's review of a 43-6 loss to top-ranked Georgia last week: The Tigers did a lot of things good but left plenty of room for improvement.

In fact, that's a pretty good description of Missouri's season.

“I was proud of our effort,” Drinkwitz said, “but effort alone is not enough. We have not played nearly clean enough or executed enough in really any of the three phases to win a game.”

Missouri's Tyler Badie leads the league with 1,030 yards rushing to go with 11 TD runs, helping to take some of the pressure off an offense that might not have quarterback Connor Bazelak again. He's been out with an injury, which left Brady Cook and Tyler Macon to split the reps last week.

The Gamecocks' Kevin Harris led the league in rushing last season, though he's struggled a bit in part due to an offseason back procedure. But he also has two capable running mates in ZaQuandre White and JuJu McDowell.

“Missouri, they got good players. They’re a good team overall. All teams in the SEC are,” Gamecocks offensive lineman Jovaughn Gwynn said, “so this is going to be a good game. We just have to keep working this week.”

The Tigers were so bad against the run earlier this season that Drinkwitz fired his defensive line coach. And while it took a couple weeks for changes to take root, Missouri was much better against Georgia's stout run game last weekend.

“I really felt like we were physical in the trenches," Drinkwitz said. "Obviously we still gave up 166 yards rushing, which is too many, but it was a step in the right direction."

The Tigers are hopeful that Bazelak will play Saturday, but whomever takes snaps for Missouri will have to be wary about throwing downfield. The Gamecocks are tied for eighth nationally and with Alabama for the SEC lead with 12 picks — three of which have been returned for touchdowns. Jaylan Foster has five of them to rank second nationally.

“He’s been third string for most of the year and prepares like he’s first string,” Gamecocks tight end Nick Muse said of Brown. “He put in the extra time even when he knew he wasn’t going play.”

The Gamecocks held a players-only meeting during their bye week following a 44-14 loss at Texas A&M. South Carolina running back Marshawn Lloyd described it as a “man-to-man” meeting to discuss what had gone wrong the first couple of months of the season and how to correct it. The Gamecocks promptly beat the Gators last weekend.

“Obviously it was pretty good,” Beamer said with a grin.

The Gamecocks, Gators and Tigers are in a logjam in the SEC race. How the last three games of the regular season shake out will not only affect the standings but could impact bowl destinations. Missouri and Florida face each other next week before the Tigers finish with Arkansas, while the Gators have nonconference games against Samford and Florida State remaining. The Gamecocks face Auburn before stepping out of conference to finish with Clemson.