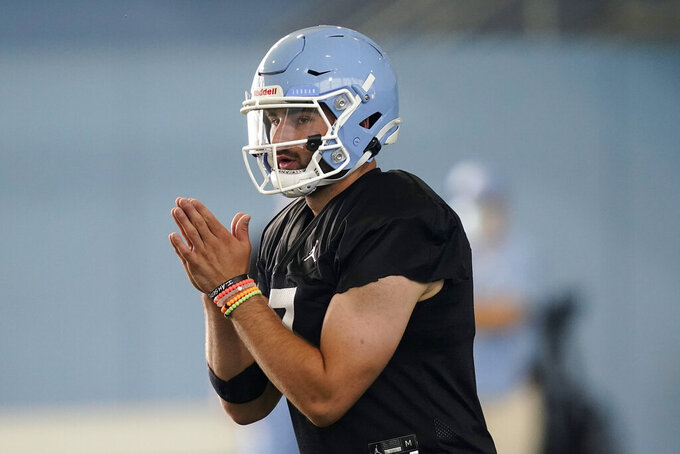 Line: North Carolina by 5 1/2, according to FanDuel Sportsbook.

The early advantage in the ACC's Coastal Division race goes to the winner. The Tar Heels and No. 14 Miami are viewed as the favorites, but the Hokies could quickly enter the picture with a solid performance to start the season.

Tar Heels QB Sam Howell against the Hokies' secondary. Howell threw three TD passes in UNC's 56-45 victory last season, but it came against a secondary decimated by injuries and COVID-19 quarantine. The Hokies are healthy going into this one and determined to show that last year was an aberration.

North Carolina: Josh Downs, WR. With UNC looking to replace 1,000-yard receiver Dyami Brown and also productive Dazz Newsome, Downs seems at the top of the expectation chart. He had two TD catches, one for 75 yards, in the Orange Bowl loss to Texas A&M after Brown opted out to prepare for the draft.

The last meeting between these two in Lane Stadium was the longest game in ACC history, a 43-41 Hokies victory in six overtimes. ... UNC is ranked in the top 10 to start the season for the first time since 1997, Mack Brown's last season in his first stint as the coach. ... The Tar Heels gained 656 yards in last season's victory, with 399 coming on the ground. ... Fuente is 4-1 against the Tar Heels and the Hokies have averaged 40.6 points in those games. ... All five of the Hokies' top-five receivers from last season are back. ... The Hokies are seeking their first victory against a Top-25 team since they beat No. 8 Ohio State 35-21 in 2014.