No. 13 Florida State to take on Oklahoma in Cheez-It Bowl 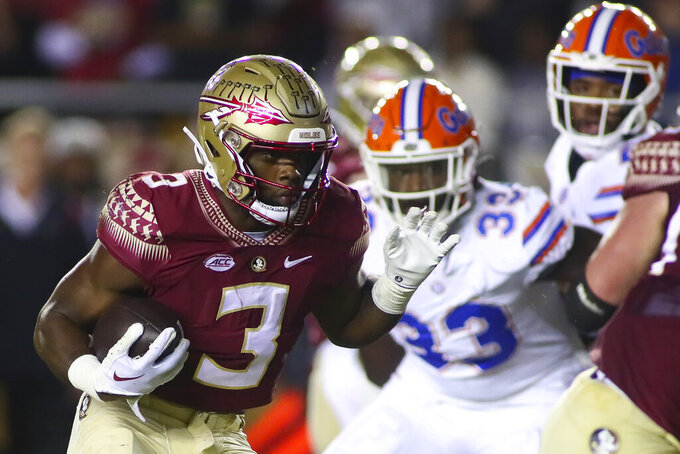 Florida State running back Trey Benson (3) runs for a touchdown in the first quarter of an NCAA college football game against Florida, Friday, Nov. 25, 2022, in Tallahassee, Fla. (AP Photo/Phil Sears)

Oklahoma: QB Dillon Gabriel was named Big 12 offensive newcomer of the year after passing for 2,920 yards and 24 touchdowns. The UCF transfer also rushed for 298 yards and five TDs.

Florida State: The Seminoles finished second to Clemson in the ACC at 5-3, a one-game improvement in league play but a four-game turnaround from last season. They closed the regular season on a five-game win streak, including a victory over rival Florida.

Oklahoma: The Sooners’ last three losses have come by three points each. They rank 18th in FBS offense (472.2 yards per game) and average nearly 33 points, which ranks 37th nationally. The Sooners are 6-1 against FSU.

Florida State: The Seminoles are 28-17-2 lifetime and have won eight of their past 11 bowls dating to 2008, including the BCS Championship over Auburn after the 2013 season.

Oklahoma: The Sooners are 31-23-1 all-time and are making their school-record 24th consecutive postseason appearance. They’ve won their past two bowls over Oregon and Florida by a combined score of 102-52.