No. 18 Wisconsin and No. 12 Notre Dame meet at Soldier Field 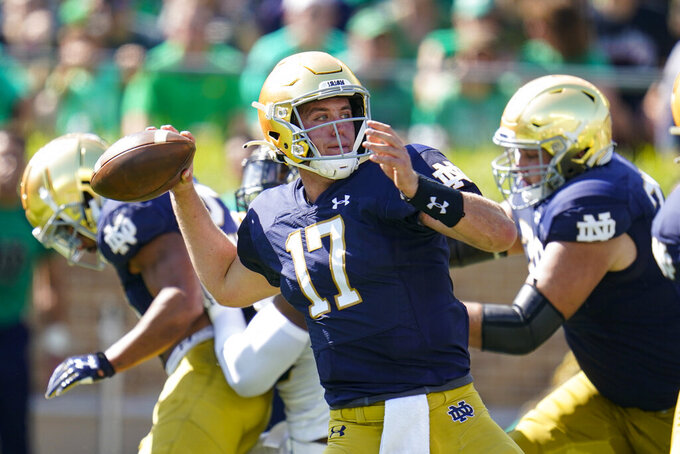 Line: Wisconsin by 6 1/2, according to FanDuel Sportsbook.

The first meeting between the Fighting Irish and the Badgers since 1964 matches teams that want to believe they are playoff contenders even though their first few games haven't backed it. Both teams have been sorting through issues that might be tough to overcome against a quality opponent.

Notre Dame's pass protection vs. Wisconsin's pass rush. Inexperience with injuries piled on top have led to poor protection for Irish QB Jack Coan, a Wisconsin transfer. Notre Dame has allowed 14 sacks, tied for second-most in the country. The Badgers have only four sacks, but expect to have OLB Leo Chenal back after a positive COVID-19 test sidelined him for two games. Chenal led the team with three sacks in seven games last season.

Wisconsin: QB Graham Mertz. The sophomore has yet to throw a touchdown pass and is ranked 98th in the country in efficiency rating at 109.97.

Coan missed last season at Wisconsin with a foot injury before transferring to Notre Dame. The senior has thrown for 828 yards and eight touchdowns. ... With a victory, Brian Kelly will surpass Knute Rockne as the winningest coach in Notre Dame history. Kelly is 105-39 in his 12th season with the Irish. Rockne was 105-12-5 from 1918-30 at Notre Dame. ... This is a Shamrock Series game for Notre Dame, a relatively new Irish tradition in which they play a “home” game away from home. Notre Dame is 9-0 in its Shamrock Series games. ... The teams were scheduled to play at Lambeau Field in Green Bay, Wisconsin in 2020, but it was scrapped because of the pandemic. ... The Badgers have played three previous games at Soldier Field, going 2-1. In 1929, they lost to Notre Dame at Soldier Field.