No. 2 Georgia looking for 6th straight win over rival Auburn 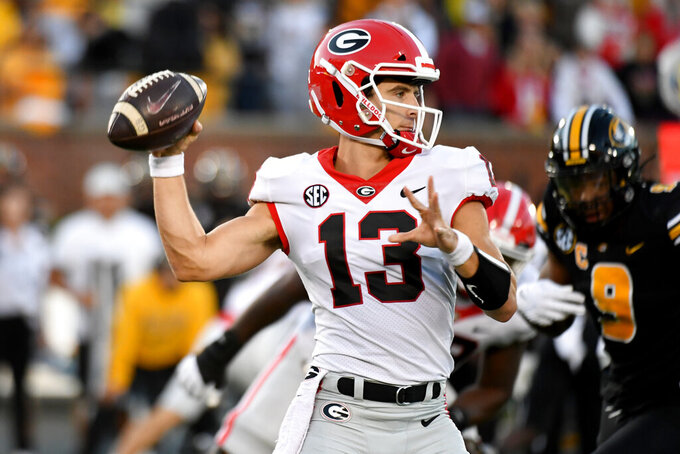 Line: Georgia by 29 1/2, according to FanDuel Sportsbook.

Georgia will try to regain its momentum after trailing through most of last week's 26-22 win at Missouri and also failing to impress in a 39-22 victory over Kent State the previous week. The Bulldogs fell from the top spot in the AP Top 25. Georgia suddenly is showing it will be difficult to match the standard it set while winning the national championship last season. Auburn, one week after escaping with an overtime win over Missouri, led by 17 points against LSU before losing 21-17 last week. Coach Bryan Harsin is 9-9 in his second season and facing pressure to prove he can compete against the nation's top teams. The Tigers already have an ugly 41-12 loss to Penn State this season and can't afford a similar showing in the SEC rivalry. Georgia has won the last five games in the series.

Auburn: QB Robby Ashford has become Auburn’s biggest playmaker as a runner and passer since taking over the starting job after T.J. Finley’s shoulder injury. Ashford, who will be making his first road start, has thrown three interceptions and had fumbling issues.

Georgia: TE Darnell Washington. Brock Bowers has received attention as one of the nation's top tight ends, the 6-foot-7, 270-pound Washington has 10 catches for 184 yards and is a powerful blocker. Washington is a nightmare for defensive backs when he has the ball in the open field.