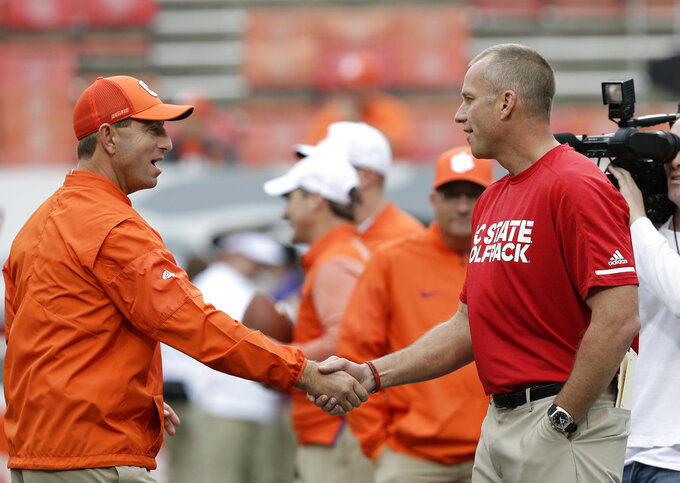 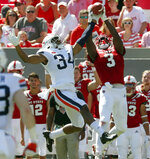 CLEMSON, S.C. (AP) — The Clemson-North Carolina State football series has been one of the most competitive in the Atlantic Coast Conference.

It has also been one of the oddest.

There have various incidents when the teams meet, including towel stealing, staffers shoving players and rogue laptops on the sidelines.

But all of that should be secondary this weekend when the third-ranked Tigers (6-0, 3-0 ACC) host the No. 16 Wolfpack (5-0, 2-0) in a showdown between the conferences' only undefeated teams. The winner gains control of the ACC Atlantic Division and the inside track to the league's title game.

"When you play games like this, there's not a lot of room for error," Clemson coach Dabo Swinney said.

There is plenty of room for strange occurrences, too.

The next year, it was Doeren apologizing when a North Carolina State staffer shoved Clemson quarterback Deshaun Watson on the sideline.

In 2016, Doeren seemed to make it a point of pride that his team knocked out Clemson star runner Wayne Gallman from the game. Gallman responded a few days later that he wished someone on his team had gotten payback for the hit on the Wolfpack's Dravious Wright.

And then there was a double-dose of strangeness last year in Clemson's 38-31 win. First, Wolfpack defensive end Bradley Chubb kept swiping quarterback Kelly Bryant's towels until officials told him to stop. After the defeat, Doeren seized on a stray laptop on Clemson's sidelines and demanded an investigation be done by the league. Clemson said the machine belonged to someone in the school's social media/communications department and the team was cleared.

A week later, Swinney mocked Doeren's claim saying the laptop was used to order a bunch of towels from Amazon.

Doeren is fully focused on finally getting over the hump against the Tigers. In 2016, the Wolfpack had a chance to short-circuit Clemson's national title run early, but missed a field goal at the end of regulation and lost 24-17 in overtime.

"Obviously, want to be able to put them away if we have the chance," Doeren said.

Some other things to watch for when No. 16 North Carolina State plays at No. 3 Clemson:

Clemson and North Carolina State are the last two undefeated teams in the ACC. This is the first matchup of perfect league teams with at least five wins since 5-0 Florida State routed 6-0 Clemson 51-14 at Death Valley in 2013. This is the fifth such showdown in ACC history.

ETIENNE ON THE MOVE

Clemson tailback Travis Etienne has taken charge of the Tigers running game the past few weeks. He has gained 564 yards his past four games, averaging more than 10 yards a carry in that stretch.

North Carolina State quarterback Ryan Finley has taken his game up another level this season. Finley threw for 338 yards and three touchdowns as the Wolfpack hung with Clemson last year. This season, Finley leads the ACC at over 324 yards passing per game.

N.C. State's receivers have been a strength all season, particularly with No. 1 threat Kelvin Harmon . The junior leads the ACC in receiving yards per game while regularly making tough, contested catches from Ryan Finley. Harmon had eight catches for 155 yards and a 40-yard touchdown in last year's meeting against the Tigers, and will need to turn in another big showing Saturday.

If recent history is an indication, don't expect a blowout. North Carolina State was the only team in the past two seasons to play the Tigers to within single digits both times. Two years ago, North Carolina State nearly upset the eventual national champions before missing a 33-yard field goal to end regulation in an overtime loss. Last year, Clemson won 38-31 in Raleigh. "To not have beaten a team in the four years I've been here just leaves a bad taste in your mouth," center Garrett Bradbury said, adding: "At the end of the day, it's a goal of mine, it's a goal of this team, to beat this team."