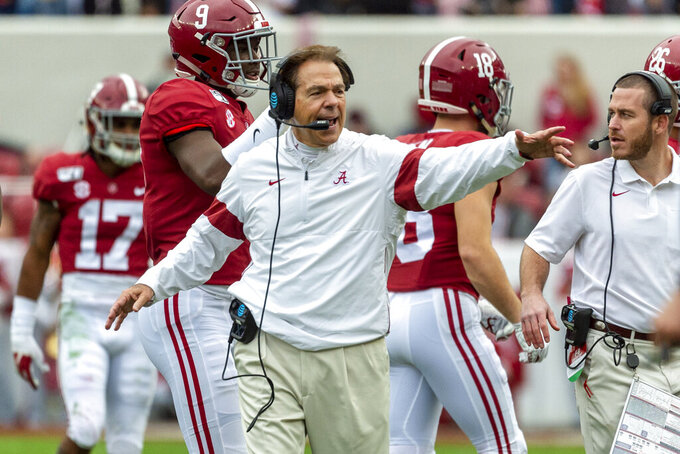 TUSCALOOSA, Ala. (AP) — This is an awkward position for Alabama; the Crimson Tide are accustomed to leaning on anyone for a helping hand.

Even if the fifth-ranked Crimson Tide ends the regular season with a win at No. 16 Auburn in Saturday’s Iron Bowl, Alabama’s likely to need an upset or two elsewhere to keep its playoff streak alive.

There’s no Southeastern Conference championship — or de facto play-in — game ahead for a team that was fifth in last week’s College Football Playoff rankings.

“It’s humbling,” Tide safety Xavier McKinney said after Saturday’s romp over Western Carolina. “When you take a loss, you kind of see things differently. You try to fix up all the little things that you could have done, which is what we’re trying to do.”

McKinney said the situation is disappointing, but “it’s also a great way to help us get better and see that we do need to improve to be that team that we want to be.”

The final test for that improvement comes in the Iron Bowl. But the final reckoning seems likely to hinge on what happens elsewhere Saturday and in league championship games.

No. 1 LSU, the only team to beat Alabama, and No. 4 Georgia are already set to meet for the SEC title in Atlanta. None of that will matter if Alabama doesn’t beat its chief rival.

“Maybe as it should be, a lot comes down to this game,” Tide coach Nick Saban said Monday. “It’s kind of a season within a season, so to speak. I think if you have to explain that to your team, or your players, they don’t really know what’s going on in football.”

In-state bragging rights are usually more than enough motivation. However, Alabama is the only team to make the first five playoffs in college football. That string is in jeopardy, as it was in the 2011 season after a loss to LSU relegated the Tide to SEC West runner-up.

The 2011 team went on to win the national title in an LSU rematch, after getting some help from an Iowa State upset of No. 2 Oklahoma State.

Alabama is used to having national title shots potentially on the line. The Tide has only played in three regular-season games out of 143 since the 2008 season that didn’t have national championship ramifications. All three came at the end of 2010 after losing 24-21 to LSU.

Alabama held firm in the playoff rankings last week after the season-ending hip injury to star quarterback Tua Tagovailoa. It’s unclear how much that will weigh in the selection committee’s ultimate evaluation of Alabama, but an impressive showing in his absence couldn’t hurt.

Along with some hopeful scoreboard watching.

"We realize that we don't control our own destiny anymore,” safety Jared Mayden said. “Since the loss happened, I feel like we don't think about it anymore. Right now, we're just focusing on winning out, winning the games we have to win.

“It's not in our hands so at this point we’ve just got to do what we can do."

One domino fell last weekend when then-No. 6 Oregon fell to Arizona State, leaving No. 6 Utah as the Pac-12’s last playoff hope. McKinney watched the last few minutes of that game but pleaded the Fifth on his reaction.

The biggest game this weekend is No. 2 Ohio State against No. 10 Michigan. Every other top contender is a double-digit favorite except Alabama, which is favored by four points.

“We’re going to come out and try to make a big statement.”