No. 8 BYU routs overmatched North Alabama to improve to 9-0 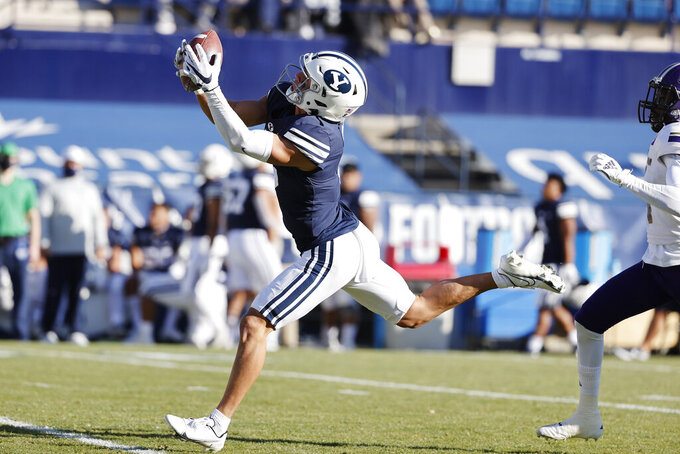 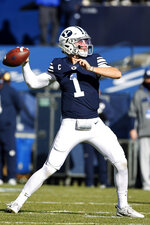 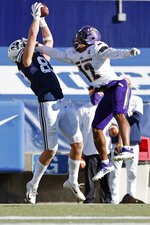 Tyler Allgeier ran for a career-high 141 yards and two touchdowns and the no. 8 Cougars routed North Alabama 66-14 on Saturday to improve to 9-0.

Allgeier had his fourth 100-yard game of the season. Zach Wilson threw for 212 yards and four touchdowns before halftime and added 33 yards rushing. He had a season-high 256.3 QB rating against the FCS Lions.

BYU scored touchdowns on all six first-half drives. The Cougars rolled up 394 total yards and averaged 11.3 yards per play before halftime.

“That’s having fun with your friends, man,” center James Empey said. “That’s a lot of fun. That’s playing football and executing at a high level regardless of who you’re playing. That’s really what we’ve been trying to do.”

Rett Files threw for 198 yards and a touchdown for the Lions (0-4). Files played during the second and fourth quarters while starting quarterback Blake Dever took snaps in the first and third quarters. Dever threw for 107 yards.

North Alabama switched up quarterbacks while trying to stimulate the offense.

”(Dever) couldn’t ever get in a rhythm today. He was up and down at times,” Lions coach Chris Willis said. “Very proud of Ritt coming in. He’s had limited time this year. ... I thought we moved the ball with him in the game and he did some good things.”

Wilson hit Gunner Romney with a 50-yard pass in double coverage on the Cougars’ first play from scrimmage to set up a 2-yard scoring toss to Isaac Rex that put BYU up 7-0.

Allgeier scored on 2-yard runs on each of BYU’s next two drives. His longest run of the day, a 39-yard sprint down the sideline, set up a 19-yard pass from Wilson to Neil Pau’u on the next play that gave the Cougars a four-touchdown lead.

Isaiah Kaufusi scooped up a fumble and returned it 50 yards to set up a 3-yard TD catch from Isaac Rex, extending the lead to 35-0.

North Alabama finally got on the board with a 2-yard run from Ja’Won Howell with 1:37 left in the first half. Any momentum gained from the touchdown was short-lived. Wilson tossed a 58-yard pass to Dax Milne to open BYU’s ensuing drive. It set up a 22-yard score on a screen pass to Kavika Fonua that gave BYU a 42-7 lead going into halftime.

North Alabama allowed only 21 total first-half points in its first three games and held all three of those earlier opponents scoreless in the first quarter.

“We knew we had to take advantage of the plays we had.” BYU coach Kalani Sitake said. “When you have 59 plays and 66 points, that’s pretty good. That’s good efficiency for our offense.”

North Alabama: The Lions never seriously threatened BYU. Their defense could not get stops and their offense struggled to extend drives when it mattered.

BYU: The Cougars coasted over an overmatched FCS opponent. BYU did not punt for the first time until the third quarter and scored its most points in a game since beating Wagner 70-6 in 2015.

BYU has two weeks off before its regular-season finale against San Diego State on December 12th. Speculation has centered on the Cougars adding a game against another opponent over the next two weeks to bolster their case for a spot in the College Football Playoff, especially in light of the Pac-12 Conference’s decision to allow non-conference games this season if specific criteria are met.

The Cougars welcome adding another team to the schedule if the opportunity arises.

“Our schedule has been set for a while. We’ve been committed to playing football,” Sitake said. “When things were looking pretty bleak for a lot of teams to play, we stuck with it. Our leadership, our administration – everybody stuck with it. If that does happen, get a hold of them because we want to play games – as many as possible.”

Even as a majority of FCS programs shuttered their football seasons until the spring, there was never any question for the Lions in pressing forward this fall. North Alabama could not afford the financial hit that it would have taken without guarantee games against FBS opponents if it had its delayed football season to 2021.

Playing BYU helped the Lions’ athletic department avoid a severe financial crunch in the midst of the COVID-19 pandemic.

Obliterating an FCS opponent isn’t likely to move the needle for BYU in the AP Top 25.