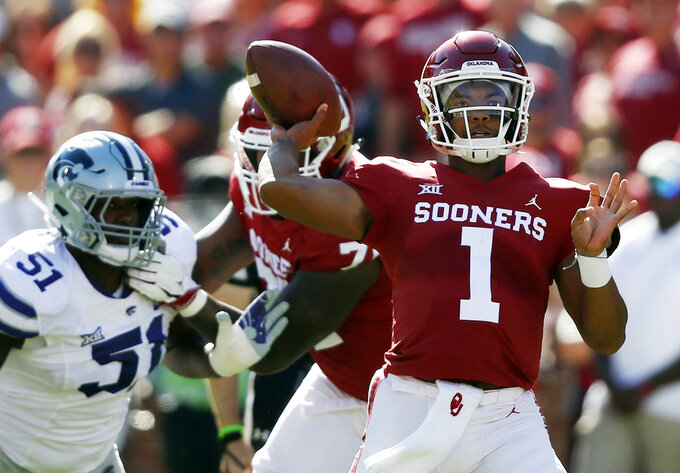 His powerful arm helped him get selected in the first round of the Major League Baseball draft as an outfielder. His speed has helped make him the second-leading rusher for the sixth-ranked Sooners. His ability to bounce back from mistakes has sparked rallies against Texas and Texas Tech.

One that's harder to see is the way he trusts Oklahoma coach Lincoln Riley's Air Raid system and the players in it. He has star receivers in Marquise Brown and CeeDee Lamb, yet he doesn't hesitate to throw to other options such as receivers Lee Morris and Grant Calcaterra and backs Trey Sermon and Carson Meier. His willingness to spread the wealth plays a role in what could wind up being the highest passer efficiency rating in college football history. Murray's rating of 216.6 blows away Baker Mayfield's mark of 198.9 set during last year's Heisman Trophy-winning season at Oklahoma.

"It creates the better matchups with your better players," Riley said. "A quarterback has to have a feel for that, without a doubt. Kyler has done a good job throughout the year of moving it around, trusting it. I think that's why he's played at the level he has."

"Our receiver room is pretty good, so we've got a good rotation," Murray said. "I don't really notice who's in the game sometimes. I'm just going through my reads and throwing the ball to the person who's open."

Murray also can take off and run. Last week, he became the first Oklahoma player to pass for at least 300 yards and pass for at least 100 in the same game in a 51-46 win over Texas Tech . Murray has 574 yards rushing this season.

Oklahoma State has to deal with all those threats on Saturday.

Morris, a former walk-on, has 16 catches for 353 yards, a team-best 22.1 yards per catch and eight touchdowns. He caught four passes for 101 yards and two scores against Texas Tech. Murray said Morris is a much different player than he was when they were at Allen (Texas) High School together.

"Lee was on JV junior year in high school," Murray said. "Not a lot of kids on this level doing what he's doing were on JV their junior year of high school. For him to play one year on varsity and do what he did, and come here and develop into how he's playing, that says a lot about his work ethic and his mindset and want-to."

Calcaterra, a preseason all-conference pick at tight end, has 17 catches for 272 yards and two scores. He had some issues with drops earlier in the season, but he made some tough catches in traffic against Texas Tech.

"For him, I think it's all in the head," Murray said. "Confidence and just playing more. That's all it is. He's obviously got the ability to do it and do what he does. He's here for a reason. I think for him, it's just all playing more and getting confidence out there on the field."

After he threw interceptions on Oklahoma's first two possessions, Murray came back to throw three touchdown passes — two to Morris and one to Meier. His 20 completions went to seven receivers, something Riley emphasizes.

"It's important," Riley said. "There's an art to that because you have to know who your guys are, too. The ball, in this offense, always does tend to find the best players. At the same time, if you go overboard with that, then people can key on that. When you can involve guys like we have, it makes us tougher to defend."