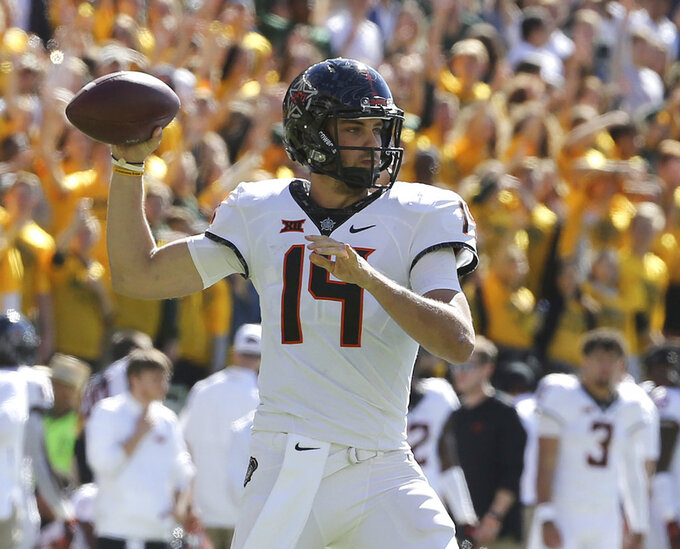 Sure, Mayfield won the Heisman Trophy last season, and Murray is one of the top contenders this season. But Mayfield also played mind games with the best of them, and it appears Murray was a willing apprentice.

Among other things, Mayfield wore a handlebar mustache the week of games against Oklahoma State, declaring a new sheriff was in town. With Oklahoma State visiting the sixth-ranked Sooners on Saturday, Murray stirred the pot like his predecessor. In his media availability this week, he started off by seemingly downplaying the Bedlam rivalry game.

"I'm just ready to play another game, honestly," Murray said. "Another great opportunity for us as a team against a good team. Obviously, there's a rivalry. Obviously, it will be intense on Saturday. But for us, we still have to execute and play well."

Then, he started delivering jabs.

Oklahoma State (5-4, 2-4 Big 12) leads the nation with 3.67 sacks per game, and defensive end Jordan Brailford leads the Big 12 with nine. Oklahoma (8-1, 5-1, No. 6 CFP) rarely allows Murray to get touched. When asked about Oklahoma State's pass rush, Murray said, "I don't really have a comment on them right now."

He was asked if he had relationships with Oklahoma State's players, he replied, "Not really. I mean, I was recruited by Oklahoma State. Other than that, I don't really know them."

When asked who recruited him, he claimed he couldn't remember Oklahoma State offensive coordinator Mike Yurcich's name, then mispronounced it. When asked if he liked Yurcich, Murray simply said, "I'm not a fan of Stillwater," the location of Oklahoma State's campus.

Oklahoma State has a chance to become bowl eligible with a win and provide a highlight for an up-and-down season that includes wins over Texas and Boise State and an ugly loss to Kansas State.

"It's a special weekend for everybody," Oklahoma State coach Mike Gundy said. "It always has been. Everybody wears orange or red this week. It's a big game. I think that works to our benefit. I know they (Oklahoma State's players) will be riled up, too. They will be excited to play in this game."

Oklahoma needs a win to stay within reach of a spot in the College Football Playoff. The Sooners also are trying to keep their place atop the Big 12 standings with West Virginia.

Oklahoma State's running back has 3,504 yards rushing in his career, seventh in school history. The junior needs 277 yards to move past Ernest Anderson for sixth place, and 294 yards to move past Barry Sanders for fifth. He ran for 228 yards in last year's game against Oklahoma.

Oklahoma running back Trey Sermon ran for career highs of 26 carries, 206 yards and three touchdowns against Texas Tech last week. He leads the team with 722 yards rushing and eight touchdowns.

Oklahoma receiver Lee Morris and Oklahoma State quarterback Taylor Cornelius are semifinalists for the Burlsworth Trophy, given to the nation's best player who started his career as a walk-on. Morris has eight touchdown receptions. Cornelius has passed for 2,622 yards and 20 touchdowns.