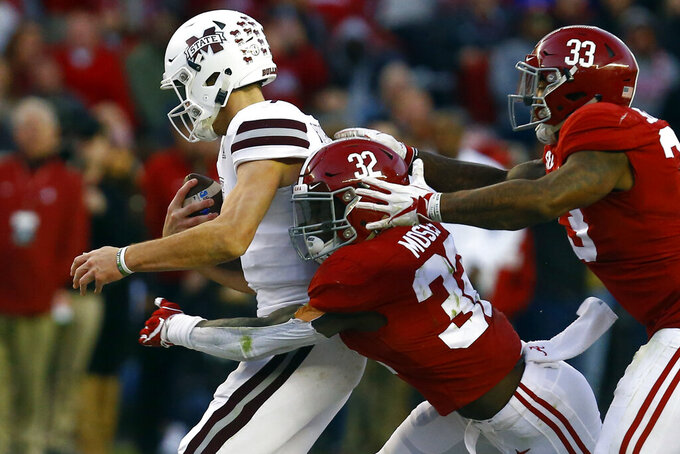 Alabama coach Nick Saban stressed the importance of humility to his players in a preseason talk, urging them to avoid the pitfalls of entitlement and self-satisfaction.

Chances are, the lesson found a receptive audience going into this season.

The preseason No. 3 Crimson Tide received that program’s equivalent of a humbling last season, if an 11-2 record can qualify as such. Alabama failed to make the College Football Playoffs for the first time thanks largely to a 48-45, regular season-ending loss to rival Auburn.

Making matters worse, that followed a 2018 season that ended with national championship game thrashing at the hands of Clemson. Alabama hasn’t failed to play for a national title or at least make the playoffs in consecutive years since Saban’s first two seasons in Tuscaloosa.

This season’s mantra might as well be, Roll Redemption.

“I do not think that last year’s team reflected the culture of what we’re trying to develop here, what has made this program be as successful over time (as) it has been,” Saban said. “There’s no question that we’re trying to emphasize the fact that we want to make sure we reestablished that culture.”

That starts with a defense that was plagued by injuries last season and not coincidentally often didn’t look like ’Bama’s typically dominant group. The biggest loss is star quarterback Tua Tagovailoa, though his season-ending hip injury gave heir apparent Mac Jones an early start at growing into the starting job.

A national championship remains the goal for a team that has won five since Saban took over in 2007, whatever that distinction entails under the circumstances. The COVID-19 pandemic that led the PAC-12 and Big Ten to opt against playing football this fall, plus a 10-game SEC-only season has changed much, but not that annual ambition.

Despite the yearly exodus to the NFL draft, Alabama did get a significant boost when linebacker Dylan Moses, wide receiver DeVonta Smith, left tackle Alex Leatherwood and tailback Najee Harris all opted to return for their senior seasons.

Alabama’s preseason guest speakers (this time via Zoom) included NBA legend Michael Jordan. Saban said Jordan and the late Kobe Bryant in 2018 both offered a similar message of the importance of remaining humble enough to maintain that competitive edge.

“When you don’t have humility, it can cause a little complacency which creates a great disregard for not doing what’s right, because you feel like you’re entitled to something,” Saban said. “And that’s not good for team chemistry.”

Here are some things to know about Alabama’s team:

The defensive front seven gets some key players back from injuries. Topping that list is star middle linebacker Moses, who missed last season with a knee injury. Fellow linebacker Josh McMillion also missed the season with an injury but got a sixth year of eligibility. Defensive end LaBryan Ray and tackle DJ Dale were sidelined for the final games with injuries. Inside linebackers Shane Lee and Christian Harris did get plenty of starting experience as freshmen.

Gone is the season opener against USC in Arlington, Texas, along with a few mismatched nonconference opponents. The SEC added games against Missouri (Sept. 26 on the road) and Kentucky (in Tuscaloosa on Nov. 21). The Tide already plays No. 4 Georgia and got a break in not having to also face No. 8 Florida.

Alabama has given scant information on its COVID-19 cases throughout the summer, though Saban said the number of tests coming out positive was down to about 1 percent in late August. The City of Tuscaloosa did shut down bars for two weeks starting Aug. 24 after images of mostly maskless students and others lined up outside bars. The university put a similar hold on student gatherings.