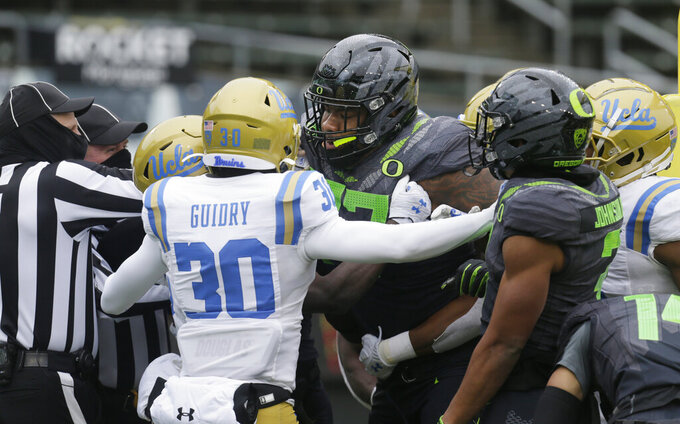 UCLA and Oregon players get into a posing match during the first quarter of an NCAA college football game Saturday, Nov. 21, 2020, in Eugene, Ore. (AP Photo/Chris Pietsch)

Shough threw for 334 yards and three touchdowns and No. 11 Oregon held off short-handed UCLA 38-35 on Saturday to remain undefeated.

Williams was Shough's favorite target, with six catches for 123 yards, including a 19-yarder for a touchdown and a 49-yard reception that helped set up a third-quarter score.

“He's been such an electric player in practice, and that's showing in the games,” Shough said about his sophomore receiver who has been challenged over the past two weeks to contribute with receiver Mycah Pittman unavailable.

At 3-0, Oregon solidified its spot atop the Pac-12 North.

“I will not have the opportunity to play vs. Oregon today for reasons out of my control. Frustrated I can’t help the team but they will still be great regardless! #GoBruins,” Thompson-Robinson posted to Twitter shortly before the game.

Griffin threw for 195 yards and a touchdown, with two interceptions. Demetric Felton rushed for a career-high 167 yards and two touchdowns, including an 11-yard scoring run that got the Bruins within three with 3:43 left.

“I think that was less about Oregon’s defense and more about how our offense was operating. All the running backs did a great job and up front, we were phenomenal. And then as far as our playmakers on the outside, I can’t ask for any better effort as quarterback. We came out and played hard today,” Griffin said.

Oregon's ensuing drive failed and UCLA got the ball back with 1:24 left. A penalty on the Ducks got the Bruins a first down on the Oregon 39. But Oregon went on to stop the Bruins on fourth-and-12 to end it.

That was way closer than the Ducks would have liked.

“We weren't our very best today, and we know there are things to improve,” Oregon coach Mario Cristobal said.

UCLA coach Chip Kelly thought that with Griffin playing well, the Bruins had a chance at the end.

“I know in Pac-12 games you need as many points as you can so if you could get one, you know, on a tip or something there. We were just trying to throw on up to the end zone and see if we could get a tip and possibly make a play. But the defensive lineman slipped out, Chase didn’t have a chance to set his feet and the ball went straight up. It’s not Chase’s fault. He was trying to everything he could.”

Thompson-Robinson, junior, threw for 196 yards and three touchdowns and ran for 52 yards and another score in UCLA's 34-10 victory over Cal last Sunday. Saturday's game was originally set for Friday night, but moved after that game at the Rose Bowl game came together.

Oregon took an early lead on Shough's 19-yard scoring pass to Devon Williams, midway through the opening quarter. The Ducks recovered a fumble on the kickoff return, and scored on the next play with Shough's 32-yard pass to Travis Dye.

Shough, who replaced Justin Herbert as Oregon's starter this season, threw for 312 yards with four touchdowns, and had nine carries for 81 yards, in a victory at Washington State last weekend.

Felton pulled the Bruins closer with a 1-yard touchdown before they tied it on a Qwantrezz Knight's 20-yard fumble return early in the second quarter. Knight scooped up the ball on a bounce after it was knocked from Oregon running back CJ Vedell's hands.

The Ducks pulled back in front on Camden Lewis' 23-yard field goal. Griffin converted on third-and-18 to Kyle Philips for 19 yards, which led to Greg Dulcich's 32-yard touchdown reception that pulled UCLA into a 21-17 lead.

Just before halftime, Jordan Happle intercepted Griffin on the Oregon 42 and ran it back 58 yards for the touchdown to give the Ducks a 24-21 lead heading into the locker room.

Brittain Brown's 2-yard touchdown got the Bruins to 31-28. But Shough found Hunter Kampmoyer with a 12-yard scoring pass.

UCLA: The Bruins announced Friday night that two players or staff had tested positive for COVID-19. Additional details were not made public. ... Griffin had not thrown a pass at the college level before Saturday. ... It was Felton’s second straight 100 -yard rushing game.

Oregon: Oregon wore new Polynesian-inspired green uniforms Saturday in honor of the team’s relationship with the Pacific region. ... Freshman linebacker Noah Sewell was carted off with a lower right leg injury in the third quarter. His teammates surrounded the cart to offer encouragement before it departed the field. Afterward, Cristobal hinted that perhaps the injury wasn't as bad as it looked: “Feel like he has a chance where he'll be OK."

MISSING PLAYERS: As many as nine UCLA players were out for the game. Kelly found out earlier this week.

“I think sometime late Wednesday or Thursday, we kind of knew that we weren’t going to have those guys. So they’re not available, they’re unavailable. You know, we do have a next man up mindset here. And I’m really proud of all of the guys,” he said.

Oregon: At Oregon State on Friday.