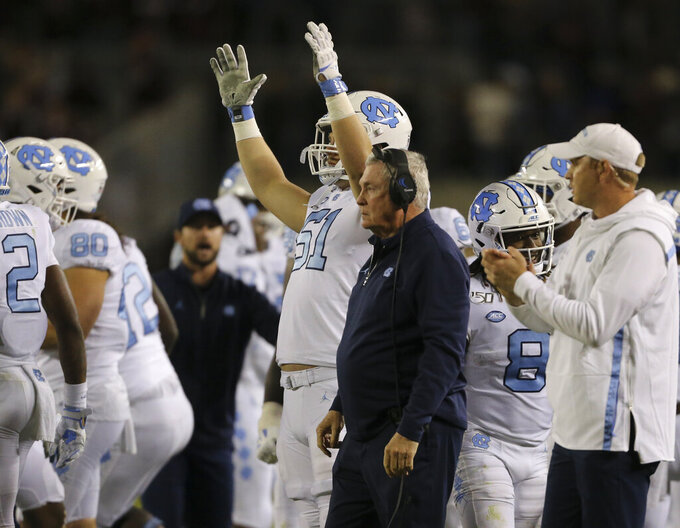 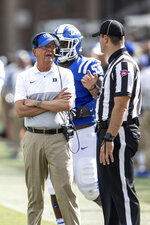 CHAPEL HILL, N.C. (AP) — Just about every game has been a wild ride for North Carolina.

The Tar Heels enter Saturday's rivalry game with Duke having played six games decided by a combined 19 points, with four going to the final play and two others decided in the final 80 seconds.

The Tar Heels (3-4, 2-2 Atlantic Coast Conference) have split those six games, the outlier being a 38-22 win at Georgia Tech on Oct. 5. Last weekend, there was the six-overtime loss at Virginia Tech that ended with the Hokies scoring on a 2-point conversion, a fittingly frenetic finish in the ACC's always-unpredictable Coastal Division.

"I think they're very confident, and what we've done is show them why we lost the game," UNC coach Mack Brown said. "In some of those last year ... it wasn't down to the last play. We had four or five one plays to win the game, and Virginia Tech did, too."

It is an improvement from last year, when the Tar Heels lost confidence by repeatedly finding ways to give up second-half leads. The Tar Heels beat South Carolina and Miami to open the year, though they haven't pulled out a close one since.

Instead, they've lost to No. 4 Clemson, No. 21 Appalachian State, No. 25 Wake Forest along with Virginia Tech, a quartet with a combined record of 24-3. The biggest margin in those games was six points, including the 21-20 loss on a failed late 2-point try against the reigning national champion Tigers.

The Blue Devils (4-3, 2-2) haven't had anything close to that experience. Duke has either won big or lost big in every game except a 33-30 loss to Pittsburgh on Oct. 5. In that one, Duke rallied from a 26-3 third-quarter deficit with the final nine-plus minutes marking the only time Duke has been in a one-possession game after halftime this season.

"I think that teams over a period of time — and we've been through that here, be it win or lose — realize the value of understand a four-quarter game," Duke coach David Cutcliffe said.

"I think that's what every one of us try to make our team understand. Now the win part of it, every one of us would love to win by four touchdowns but it's not realistic in the league we're playing in."

Some other things to know heading into the Duke-North Carolina matchup:

Duke has won the past three meetings, allowing the Blue Devils to keep the "Victory Bell" presented to the winner.

As for UNC, a win would give Brown a program record for most wins as the Tar Heels' coach. He's currently tied with Dick Crum with 72 wins — 69 coming during a 1988-97 stint in Chapel Hill — and has 247 overall victories overall to rank as the nation's winningest active coach.

The Blue Devils seem to have trouble putting lopsided conference losses behind them.

Starting with their Coastal Division championship season in 2013, they've lost at least one ACC game a year by 24 or more points. And they're 1-5 in league games played the following week.

This time, Duke is coming off a 48-14 loss at preseason Coastal favorite Virginia.

Duke has 16 turnovers on the season with 14 coming in its three losses, including six in a loss to Pittsburgh and five last week at Virginia.

The Tar Heels will turn to freshman Jonathan Kim for field-goal attempts. Kim handled kickoff duties against Virginia Tech but has yet to try a field goal.

He replaces Noah Ruggles, who was 10 of 16 on field goals but missed a 35-yarder and had a 44-yarder blocked in the overtime sessions at Virginia Tech.

7 minutes ago
By Ralph D. Russo 2 hrs ago
4 hrs ago
John Fineran 4 hrs ago
By Cliff Brunt 5 hrs ago