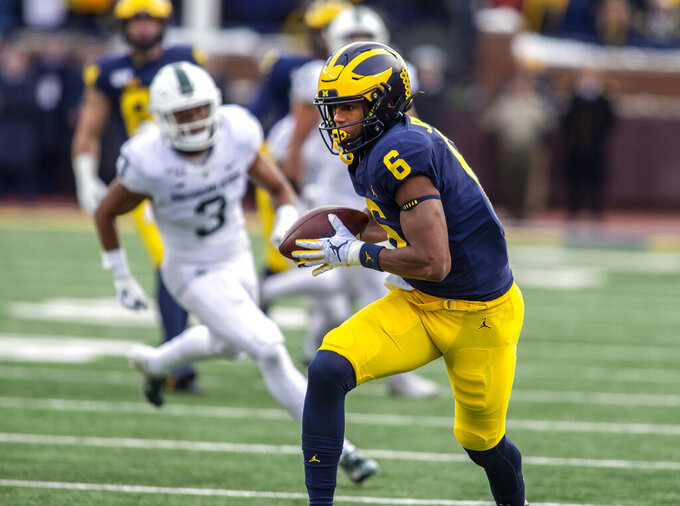 FILE - Michigan wide receiver Cornelius Johnson (6) rushes after making a catch to score a touchdown in the fourth quarter of an NCAA college football game against Michigan State in Ann Arbor, Mich., in this Saturday, Nov. 16, 2019, file photo. Johnson had 16 receptions for 254 yards and a team-high three touchdowns last year and has a shot to at least double his production in each category this season. (AP Photo/Tony Ding, File)

WR D.J. Matthews, senior. The graduate transfer from Florida State hasn't yet put up the numbers expected of him when he was a four-star recruit coming out of high school. Matthews is first in line to take over the inside receiver job vacated by Whop Philyor. His best year at Florida State was 2019, when he had 36 catches for 355 yards. He opted out last season.

RB Tayon Fleet-Davis, senior. Fleet-Davis two years ago appeared to be the Terrapins' back of the future. A drunken-driving arrest and disciplinary action has limited him to one game since November 2019. The Terps have young talent at his position, but Fleet-Davis will be given ample opportunity to re-establish himself.

WR Cornelius Johnson. He had 16 receptions for 254 yards and a team-high three touchdowns last year and has a shot to at least double his production in each category this season. The 6-foot-3, 205-pound, big-play receiver showed he had chemistry with QB Cade McNamara last season with nine catches for 105 yards and two scores against Rutgers.

LB Chase Kline, junior. He’s played in all 20 games in his career and will be needed to step up after tackler extraordinaire Antjuan Simmons decided to pass on another season in East Lansing. Kline was credited with 29 tackles and two forced fumbles last season.

CB Lathan Ransom, sophomore. Ransom contributed at corner and on special teams the second half of the season, played a lot in the national semifinal against Clemson, and has a chance to start at corner or safety. Ohio State needs to get things settled in the secondary after losing Shaun Wade. Ransom could be the next standout for the Buckeyes, who ranked 122nd out of 127 teams in pass defense.

LB Curtis Jacobs, sophomore. The former four-star recruit is in line to start on the strongside now that Brandon Smith has moved to the weakside. The Nittany Lions are trying to become more athletic at linebacker, and with Jacobs' high school experience as a receiver and defensive back, he should have no problem dropping into pass coverage.

DL Aaron Lewis, sophomore. Lewis originally signed with Michigan in the spring of 2020 and immediately transferred back to his home state of New Jersey. He had 12 tackles and a sack in eight games in his first year for the Scarlet Knights, put on 13 pounds in the offseason to get up to 255 and will be counted on for more production this fall.

WR Marquez Beason, sophomore. With Josh Imatorbhebhe leaving to enter the NFL draft, Illinois is short on depth at receiver. Beason, who started two games at cornerback last year, switched to receiver but was limitea d by injury this spring. Come fall, the former four-star recruit could play a major role for new coach Bret Bielema.

DT Noah Shannon, junior. His task is to replace Big Ten defensive player of the year Daviyon Nixon. The 6-foot, 288-pounder played in all eight games last season, started one, and had 11 tackles and a shared sack. Iowa has had a run of standout defensive linemen, and this is Shannon's opportunity to be the next one.

OT Daniel Faalele, junior. The Australian opted out in 2020 after starting at right tackle his first two years and has shed some weight from his listed frame of 6-foot-9 and 400 pounds. He’ll be a key cog on one of the most experienced FBS offensive lines with guard Connor Olson and tackle Sam Schlueter coming back and center John Michael Schmitz and tackle Blaise Andries also back.

WR Omar Manning, junior. The Huskers desperately need help at receiver, and they thought they would get it from Manning last season. An undisclosed injury kept him off the field except for a brief appearance against Northwestern. Manning has had a strong spring and shown flashes of 2019 when he was the top junior college receiver in the nation.

LB Chris Bergin, senior. He's had a productive career and was the team's third-leading tackler in 2020, but he's been a bit overshadowed by Paddy Fisher and Blake Gallagher. With those two gone, Bergin's role is going to be magnified.

WR Mershawn Rice, sophomore. Rivals.com rated Rice as a four-star recruit, but he appeared in only one game and didn't have a catch last season. The Boilermakers were short on receivers this spring, and Rice took advantage of his opportunity. Coach Jeff Brohm mentioned Rice as an up-and-comer.

OG Jack Nelson, redshirt freshman: Rated by 247Sports as a five-star prospect and the nation’s No. 2 offensive tackle recruit in his class, Nelson has made a home for himself at guard this spring. He's been getting first-team reps at right guard, an indication he could open the fall as a starter.