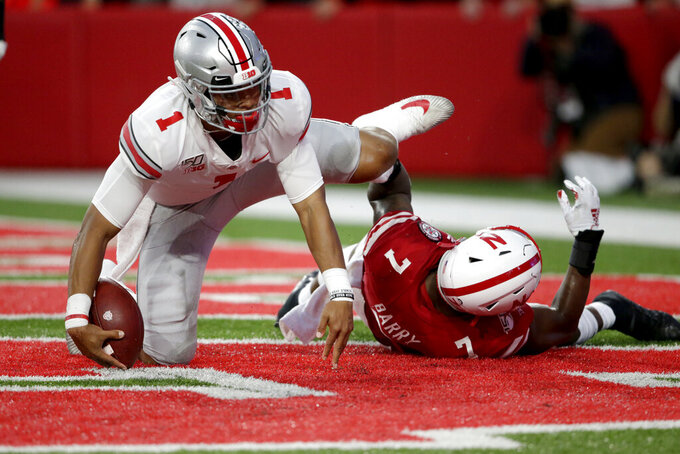 The college football season started with the general consensus that Clemson and Alabama, winners of the last four national champions, were a cut above the rest of college football.

Georgia, Oklahoma and Ohio State were the most likely challengers, but how serious? Back in May, Las Vegas sportsbooks had the Clemson-Alabama combo as a solid favorite over the field to win the College Football Playoff again.

Heading into October, Alabama and Clemson are still at the top of the AP college football poll — though in a different order from how they started. The field, though, seems to be closing the gap.

Alabama moved to No. 1 on Sunday in the Top 25 presented by Regions Bank, with defending champion and preseason No. 1 Clemson slipping to No. 2 after a sketchy — though victorious — performance against North Carolina.

For the first time this season, some AP voters decided a team other than Alabama or Clemson deserved their first-place votes. No. 3 Georgia received four. No. 4 Ohio State had seven and No. 7 Auburn got three.

An argument could be made for No. 5 LSU at No. 1, too, and No. 6 Oklahoma looks even better than last year.

The last time as many as five teams received first-place votes during the regular season was early November 2015, when six teams were listed No. 1 on at least one ballot. That was also the first season that ended with Alabama and Clemson playing for the national title.

For those hoping to avoid Alabama-Clemson Part V in the playoff, September brought a glimmer of hope.

Reality check: The Tide extended its own record with an appearance at No. 1 for the 12th consecutive season. Alabama is almost always a justifiable No. 1.

Reality check: The Tigers are being held to unrealistically high standards. They also have not played up to their lofty potential on offense. Both of these things are true.

Reality check: Kirby Smart likes to keep his running backs fresh, but as the games get bigger, expect more work for D'Andre Swift, who has only 55 touches from scrimmage.

Reality check: The Buckeyes haven't faced another top team, but their schedule has been about the equivalent of the teams ranked ahead of them and no team in the country has been more dominant.

Ranked: Too low. The Buckeyes should be No. 1.

Next: vs. Utah State.

Reality check: The Tigers probably weren't expecting to face a potential first-round draft pick quarterback (Jordan Love) when they signed up for a game against Utah State.

Reality check: The Sooners are allowing 5.32 yards per game. Last year that number was 6.13. If they can keep it below about 5.6, with that offense, it's almost like an elite defense.

Reality check: If you leaned heavily on strength of schedule, the Tigers could make a case for No. 1.

Reality check: The Badgers were due for an off day and Northwestern usually brings that out of them.

Next: vs. Bowling Green.

Reality check: QB Ian Book was a revelation last year as an upgrade over Brandon Wimbush. So far, Book hasn't shown much growth.

Reality check: The fifth of five top-10 SEC teams, the Gators have a chance to prove they belong in the same class as other four. Reality check is skeptical.

Reality check: The Longhorns' secondary is a mess with three injured starters. The good news is the Big 12 is not as loaded with potent passing teams as it usually has been.

Reality check: The Maryland game was almost too easy for the Nittany Lions.

Reality check: October should tell us all we need to know about the Ducks, with Cal at home, Colorado at home, at Washington and Washington State at home.

Reality check: Iowa and Georgia are the only teams that have not allowed a rushing touchdown.

Reality check: The Huskies have to get better at finishing drives. They rank 98th in the country in red-zone touchdown conversions at 54.5%.

Reality check: The Broncos have to like seeing Florida State pick it up in recent weeks.

Reality check: The Utes love to play smash-mouth offense, but QB Tyler Huntley (74.6% completions and no interceptions) is showing they might want to lean on him more.

Next: at Cincinnati, Friday.

Reality check: Been a while since the Knights have had to respond to a loss. Let's see how they do.

Ranked: About right. Nos. 14-18 could line up in almost any order and it would be fine.

Reality check: Well, you got the Rutgers coach fired.

Reality check: The Sun Devils have played sturdy defense without forcing many turnovers (seven) or generating a lot of negative plays (five tackles for loss per game). That can be difficult to sustain.

Reality check: The Cowboys always seem to have one of the best running backs in the Big 12, but Chuba Hubbard (187.6 yards rushing per game) looks extra special.

Reality check: The Demon Deacons are ranked for the first time since 2008 behind QB Jamie Newman, who has been the best QB in the ACC — yep, even better than that guy for Clemson.

Reality check: Former Texas QB Shane Buechele is putting up big numbers, but RB Xavier Jones, the AAC's leading rusher, has been the breakout star for the first SMU team to be ranked in 33 years.

Instead of Michigan and Texas A&M how about California or Appalachian State?