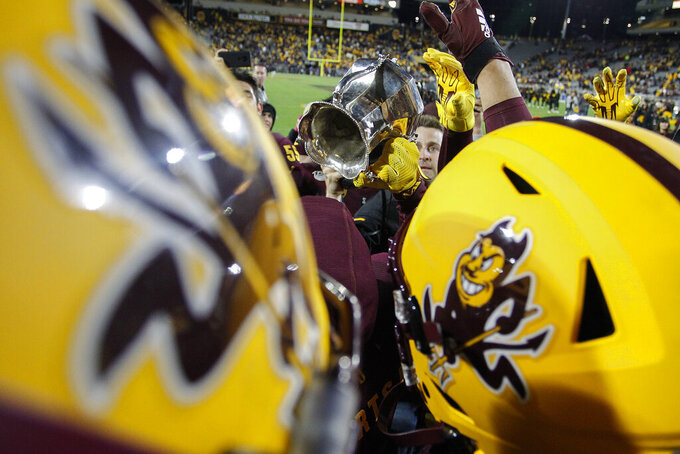 EL PASO, Texas (AP) — The top running backs for Arizona State and Florida State won't be around for the Sun Bowl.

Sun Devils coach Herm Edwards and interim Seminoles coach Odell Haggins can live with those decisions regardless of their effect on Tuesday's game.

“Don't forget that these players that are sitting out actually helped these teams get to bowl games,” Edwards said. "Some people get all sideways. ‘Why isn’t he playing?' It's the way of the world. You don't disrespect them. You don't get mad at them.

“I'm hoping they'll show up for the game, stand on the sidelines. As long as you play with 11, you're OK.”

Eno Benjamin of Arizona State and Cam Akers of Florida State will miss the game after declaring for the NFL draft. Benjamin is in Arizona State's top 10 in career rushing, and Akers is one of three Seminoles with multiple 1,000-yard seasons.

The Sun Devils also won't have receiver Brandon Aiyuk because of his pro hopes, same as Seminoles cornerback Stanford Samuels.

Without Benjamin and Akers, it's hard to know where the teams will turn in the running game.

The Seminoles also are without second-leading rusher Khalan Laborn, leaving the likely duties to walk-ons Deonte Sheffield and Treshaun Ward. Redshirt freshman A.J. Carter has 38 yards for the season for the Sun Devils.

Haggins is finishing his second stint as interim coach after replacing the fired Willie Taggart. Mike Norvell will take over after the Sun Bowl. Haggins is 4-1 as the interim coach, including an Independence Bowl win in 2017.

“It’s just like being a coach,” said Haggins, who has coached at Florida State since the early 1990s. “I’m going out and doing my job. It’s no different.”

BACK IN EL PASO

Arizona State is appearing in the Sun Bowl for the third time in the past six seasons, but it's the first for Edwards. The former NFL player and coach is in his second season after a lengthy stint as an NFL television analyst. The Sun Devils are 14-11 under Edwards, with a loss in the Las Vegas Bowl last year.

It's the fifth overall meeting between the schools, but the first since 1984. The first meeting in the 1971 Fiesta Bowl was Arizona State's only win, 45-38. The Seminoles have won the past three, once in Tampa, Florida, and twice at Arizona State.