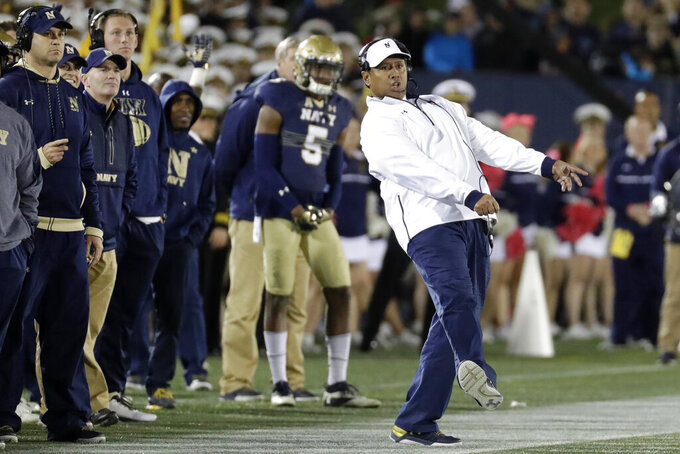 FILE - In this Oct. 22, 2016, file photo, Navy head coach Ken Niumatalolo, right, reacts as he watches a failed field goal-attempt in the second half of an NCAA college football game against Memphis, in Annapolis, Md. The 120th Army-Navy game is set for Saturday in Philadelphia. Navy leads the series 60-52-7. (AP Photo/Patrick Semansky, File)

PHILADELPHIA (AP) — Army's sensational turnaround under coach Jeff Monken has been highlighted by 10-win seasons, bowl game victories and even a spot in the national rankings.

But a win Saturday against Navy would mean a bit more -- the Black Knights' senior class would go out with a sweep of the series. Four wins in four years, a wildly successful run for a program that had lost 14 straight games to the Midshipmen.

"I think it would be a tremendous source of pride for our senior class to be able to do that," Monken said. "This senior class has meant a lot for the program and the contributions they've made. I know it would mean a lot to this class to complete their career with a win over Navy and the ability to go 4-0."

The Army-Navy series has long held its spot as the sport's most patriotic rivalry, with pride, prestige and the Commander-in-Chief's Trophy at stake for each service academy in the 120th edition of the matchup. Lincoln Financial Field will be stuffed with Cadets and Midshipmen standing, saluting, bouncing and cheering for the entirety of what's billed as “America's Game” among the nearly 70,000 fans.

President Donald Trump will attend the Army-Navy game for a second straight year. Trump also was at the 2016 game as president-elect. He is the 10th sitting president to attend, a tradition that began with Theodore Roosevelt in 1901. Presidents, by custom, sit on the Army side of the stadium for one half and the Navy side for the other.

If history holds, Trump likely will see a close call: The last four games have been decided by a total of 16 points and only once since 2010 has a team won by more than a touchdown.

Hopkins had two rushing touchdowns and the Black Knights recovered two fumbles in the fourth quarter to beat Navy 17-10 last year and retain the Commander-in-Chief's Trophy.

"It is amazing that these games continue to be incredible battles regardless of what the situations are with either team," Monken said.

For most of this century, the rivalry was lopsided in Navy's favor. Monken has orchestrated a rebuild of the program that has the Black Knights in position to win four straight games in the series for the first time since 1993 to 1996. If Army defeats Navy, then Navy, Air Force and Army will share in the Commander-In-Chief's Trophy because the three teams would all be 1-1 against each other (Navy beat Air Force and Air Force beat Army) and the trophy would remain at West Point, New York.

Army averages 311.7 rushing yards per game (second nationally) in 2019 and has 3,740 yards rushing total (also second). Hopkins leads with seven rushing touchdowns and 706 yards. He'll need a big game to get the upset win and complete the sweep.

"A lot of guys want to come up to the seniors and talk about how we're trying to do it for you guys, we want to get this last one for y'all," Hopkins said. "Really for me the message is, do it for yourselves. It's a big deal to continue your own streak."

"Going to a bowl game is always one of our top goals, but right now our only focus is to get goal number one and that is to beat Army and win back the Commander-In-Chief's Trophy," Niumatalolo said.

Navy QB Malcolm Perry has rushed for 1,500 yards and 19 touchdowns, making him only the second player (after Keenan Reynolds) in school history to rush for more than 1,000 yards in a single season three times. Perry is 87 yards behind Napoleon McCallum for first on Navy's career single-season rushing list and 68 yards behind Will Worth for the single-season total offense record.

He also completed 43 of his 79 pass attempts for 1,207 yards and six touchdowns. Perry is fifth in the country in rushing yards per game (136.4) and tied for fifth in rushing touchdowns. The 5-foot-9, 190-pound Perry could set a school record Saturday with his 10th straight 100-yard rushing game. He can't believe he's being discussed among the short list of Navy's greatest players.

"It's awesome hearing about it," Perry said. “It hasn't really hit me yet, the magnitude of it.”