Buckeyes' Sermon breaks out ahead of national title game 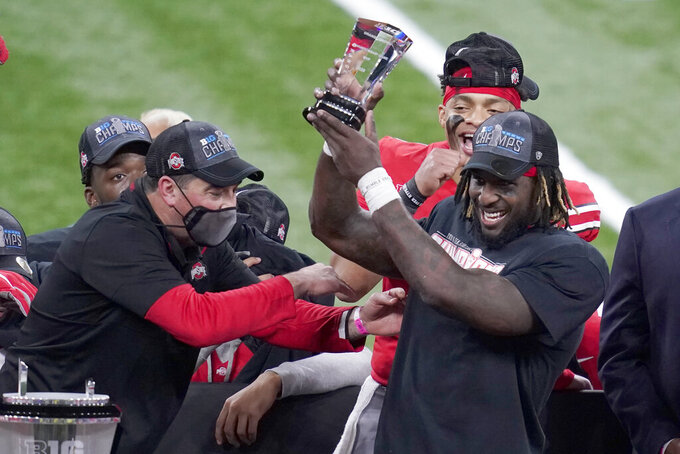 Nobody is overlooking him now.

Astonishing efforts in the past two games — including a 331-yard, two-touchdown performance in the Big Ten championship game that earned him a Twitter shoutout from LeBron James — have brought Sermon the level of national attention he sought while playing three solid years at Oklahoma.

“When I came here, my goal was to do whatever I can to help this team out and play for a national championship,” Sermon said this week as the Buckeyes prepared to play top-ranked Alabama in the title game on Monday night. “It’s all happened, and it does kind of seem like a dream.”

More people learned Sermon's name last weekend when he rushed for 193 yards and a TD and caught four passes for 61 yards in Ohio State's 49-28 victory over Clemson in a College Football Playoff semifinal, a game few prognosticators thought the Buckeyes would win.

In the Clemson game, he was also the guy with the sly smile.

ESPN cameras caught the engaging Sermon, his helmet pushed back on his head, glancing up and smiling sheepishly, almost mischievously, after a replay showed he was down before rolling off a defender and trying to sell it to officials as a touchdown run. ESPN replayed the smile moment a few times, and soon it was showing up in internet memes.

Sermon ended up at Ohio State because he needed a place to play as a graduate transfer and the Buckeyes needed a seasoned performer in their injury-depleted running backs room. When he signed on in the spring, presumptive starter Master Teague III was rehabbing from an Achilles tendon injury and his future was uncertain.

Sermon, who was recruited by Ohio State as a prep player, arrived in Columbus with some bona fides.

He was the Big 12′s Offensive Freshman of the Year in 2017, scoring his first touchdown at Ohio Stadium on a pass from Baker Mayfield in a win over the Buckeyes. Joining Kyler Murray in the Sooners' backfield in 2018, he had his best season, rushing for 947 yards and scoring 13 touchdowns.

In his junior year, Sermon had to fight for playing time before his season was cut short by a knee injury in the ninth game. He graduated from Oklahoma so he could transfer without sitting out, and continued to rehab his knee as the Big Ten stopped and started again because of the pandemic.

“It was pretty rough in the beginning,” he said. “Just coming here and not being able to be around everybody, and then everything gets shut down and then picks back up.”

Playing behind Teague in the first four games, Sermon had 232 rushing yards and zero touchdowns. In the three games since, he's rolled up 636 yards with four TDs while averaging 9 yards per carry.

Coach Ryan Day said that with Teague sidelined again, Sermon got more carries, gained back some confidence and found his old groove. His tackle-breaking style and bursts in the secondary have drawn comparisons to Ezekiel Elliott, who helped carry Ohio State to a national championship after the 2014 season.

“The best part about Trey is when all that was going on, he never came into my office, never complained, never said ‘I need more carries,’ none of that stuff,” Day said. “Just kept his mouth shut and kept going to work. I think that is the best part of this whole story, is he just kept going every single day to work and never said anything about it. And now he’s playing at a high, high level.”

Sermon, 6-foot-1 and 215 pounds, is back on the radar of pro scouts and can move up the draft board if he can manage to stand out Monday among an array of other NFL-bound players, including Alabama's Heisman Trophy winner DeVonta Smith.

Jim Nagy, executive director of the Reese's Senior Bowl and a longtime NFL scout, puts Sermon in the same category as Josh Jacobs, the former Alabama back drafted in the first round by the Las Vegas Raiders in 2019 despite getting stuck behind stars Damien Harris and Najee Harris on the Tide's depth chart.