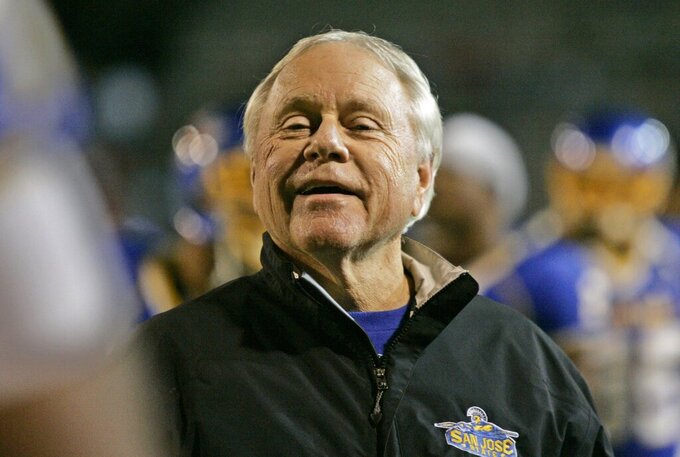 FILE - In this Friday, Nov. 21, 2008, file photo, then San Jose State head coach Dick Tomey smiles in the first quarter against Fresno State during an NCAA college football game in San Jose, Calif. Tomey, the winningest football coach in University of Arizona history, died Friday night, May 10, 2019, in Tucson, Ariz. He was 80. Tomey was 183-145-7 overall in 20 years as head coach at Hawaii, Arizona and San Jose State. He was diagnosed with lung cancer in December. (AP Photo/Paul Sakuma, File)

He died surrounded by family Friday night in Tucson, his family and the university said. He was diagnosed with lung cancer in December.

Tomey spent 14 years at Arizona, going 95-64 while taking the Wildcats to seven bowl games, including the Fiesta Bowl in 1993. Arizona went 12-1 in 1998 under Tomey and beat Nebraska in the Holiday Bowl to finish a program-best No. 4 in The Associated Press poll.

"On the football field he was a tough as nails coach, who loved fierce competition and the thrill of team building," the family said in a statement Saturday. "He loved his players, every single one of them — always.

"He was hard on them. He constantly raised the bar. He could do that because he knew how to find the goodness and the talent in people. If he didn't find it immediately, he kept looking until he did, and once he found goodness/talent he never lost sight of it."

Born in Indiana, Tomey graduated from DePauw University and got his first varsity job coaching defensive backs at Davidson in 1985 after stints coaching freshmen teams at Miami of Ohio and Northern Illinois.

Tomey spent four seasons at Kansas before following Pepper Rodgers to UCLA. He was the Bruins defensive coordinator in 1976 before being named Hawaii's coach in 1977.

Tomey turned around the Rainbow Warriors, leading the program to its first AP ranking in 1981. He went 63-46-3 at Hawaii before being hired to replace Larry Smith at Arizona in 1987. Tomey went 25-35 in five seasons at San Jose State.

"I've never met a more passionate, loving man, who was also one of the best coaches to ever coach," he said.

Tomey is survived by his wife, Nanci; a son, Rich, and daughter Angie.

The family said a celebration of life will be announced later.