Dominant first half pushes No. 25 Tulane past Memphis 38-28 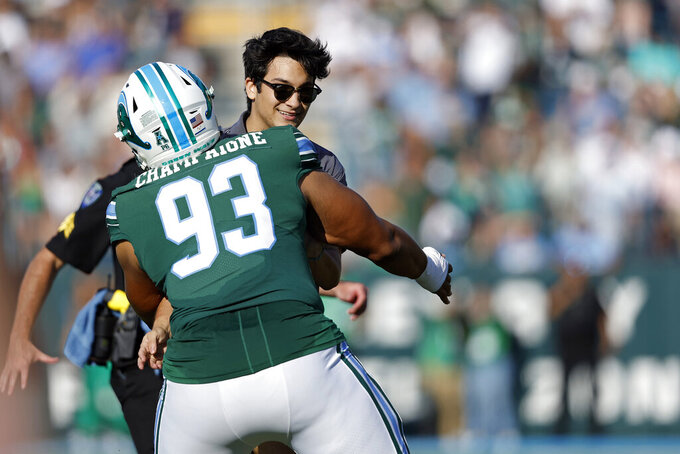 An unidentified spectator running on the field is restrained by Tulane defensive lineman Elijah Champaigne (93) during the first half of an NCAA college football game against Memphis in New Orleans, Saturday, Oct. 22, 2022. (AP Photo/Tyler Kaufman)

NEW ORLEANS (AP) — Michael Pratt threw for a touchdown and ran for another score, Tyjae Spears ran for 125 yards and another TD and No. 25 Tulane celebrated its first Top 25 ranking since 1998 with a dominant first half and hung on to beat Memphis 38-28 on Saturday.

The Green Wave (7-1, 4-0 American Athletic) scored on three of their first four possessions and took a 35-0 lead into the second half before the Tigers rallied.

“A lot of good things, but there are some things we need to correct,” Tulane coach Willie Fritz said. “It’s always just better to do it from a win than a loss.”

“Obviously a disappointing loss,” Memphis coach Ryan Silverfield said. “Not the way we wanted to start the game by any stretch of the imagination.”

Pratt and the Tulane offense drove 80 yards in 11 plays on their opening drive, with the Green Wave quarterback running it in from six yards out to make it 7-0.

The first of Memphis’ two special teams miscues came after their first drive stalled, as Tulane’s Jha’Quan Jackson caught the resulting punt at his 10, got a key block before exploding down the right sideline for the 90-yard return for a touchdown.

The Green Wave recovered a muffed put at the Memphis 12, and Spears took it in three plays later to make it 21-0 with 2:02 remaining in the opening quarter.

Memphis finally got untracked in the third quarter with a pair of touchdown passes from Henigan, first on a 7-yard pass to Koby Drake and then a 33-yard strike to Lewis.

“One thing coach Silverfield said was we know we’re capable of playing four quarters, but we haven’t shown it,” Henigan said.

Henigan connected with Lewis again for a 55-yard score with just over four minutes left in the game to pull the Tigers to within 10, but the ensuing onside attempt went out of bounds. A final drive ended when the Tigers drove to the Tulane 6, but Henigan was intercepted in the end zone.

“I think we did a very good job of executing the plan, and knowing what they were going to do when they came out,” said Tulane linebacker Dorian Williams.

Memphis: After starting the season 4-1, Memphis has dropped three straight.

Tulane: The 21 first-quarter points was the most for the Green Wave in the opening quarter this season and left Tulane with a 62-10 scoring advantage in the opening 15 minutes.

Memphis has its open date this week. The Tigers return to action on Nov. 5 with consecutive home games against UCF, Tulsa and North Alabama.

Tulane will have a week off before hitting the road to take on Tulsa on Nov. 5. The Green Wave closes out its home slate with games against UCF and SMU.