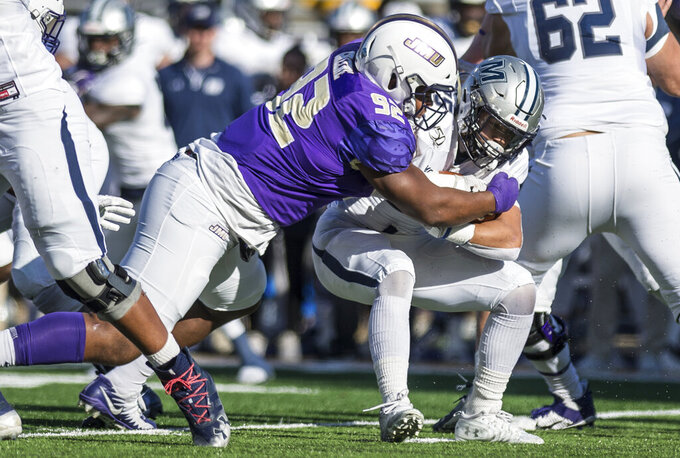 FILE - James Madison defensive lineman Mike Greene (92) wraps up Monmouth running back Pete Guerriero during the first half of a second-round game in the NCAA Football Championship Subdivision playoffs in Harrisonburg, Va., in this Saturday, Dec. 7, 2019, file photo. Greene is a member of The Associated Press FCS All-America team, announced Wednesday, May 12, 2021. (Daniel Lin/Daily News-Record via AP, File) 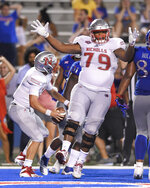 The Championship Subdivision’s spring season, pushed back nearly six months because of the pandemic, will conclude Sunday with the national title game between No. 2-seeded Sam Houston and top-seeded South Dakota State in Frisco, Texas.

The two biggest awards in Division I football’s second tier will be handed out Saturday. The Payton award goes to the player of the year and the Buck Buchanan Award honors the top defensive player in the FCS. The AP’s All-America first team includes five of the 16 Payton award finalists and 10 of the 18 Buchanan finalists.

Barriere passed for 2,448 yards and 19 touchdowns in seven games for Eastern Washington. The second-team quarterback was Cole Kelley from Southeastern Louisiana.

Chestnut led FCS in rushing at 171 yards per game. He was joined in the first team backfield by North Dakota's Otis Weah, who averaged 7.1 yards per carry.

Herres led the nation in receiving at 122 yards per game.

Sanford defensive back Chris Edmond was a first-team selection after intercepting four passes this season, and Presbyterian linebacker Colby Campbell was a first-team pick after leading the nation with 96 tackles.

The Associated Press FCS All-America team was chosen by a panel of media members who cover FCS, with coordination from College Sports Information Directors of America: