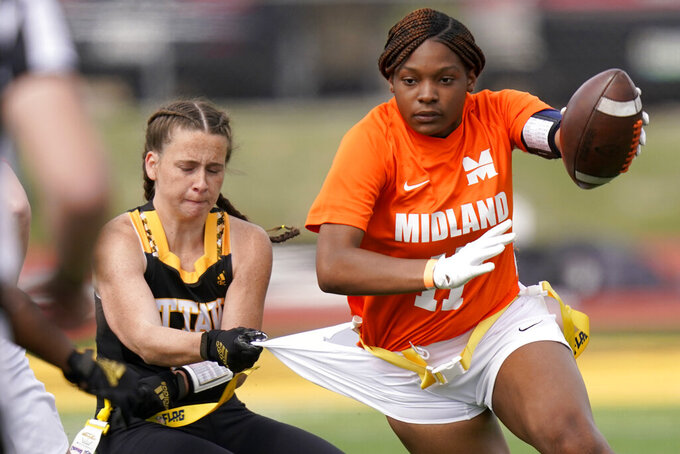 FREMONT, Neb. (AP) — From a distance, it looks like college kids in sweat clothes tossing a football around on a campus green space.

Draw closer, and it's apparent this is no sandlot game.

A coach is explaining routes he wants receivers to run on a play he calls “Bingo.” Then he tells his quarterbacks to make quicker decisions. Next he demonstrates how a receiver in motion sets up as a blocker next to the center and the running back takes a handoff and heads for a hole that should open on the left side.

The women Jaison Jones is coaching listen intently and ask lots of questions. More than half showed up at Midland University from faraway places to continue playing the growing sport of flag football at the 1,600-student school in a town of 26,000 nestled in the farmland of eastern Nebraska.

Allison Maulfair and Spencer Mauk were teammates at their high school in Bradenton, Florida, a state where a nation-high 7,700 girls at 278 schools play varsity flag football.

Jones recruited them at summer showcase, and after Maulfair and Mauk made the 1,500-mile drive to Fremont for a visit, they decided it was where they wanted to be.

“I’m just really passionate about this sport,” Maulfair said. “I fell in love with it my freshman year of high school and haven’t stopped loving it. It doesn’t matter where I’m at. It just matters playing the game with great people, really.”

E’leseana Patterson figured she was done with flag football after she quarterbacked her Las Vegas high school team to a state championship in 2019. Her plan was to stay home, help her mom and take classes at UNLV.

On a lark, she went to a showcase in Vegas and ended up impressing Jones. She took a virtual campus tour and knew she wanted to be part of what was happening at Midland, as did four other players she competed against in high school.

“Once my mom saw someone wanted me to play the sport I love, she was like, ‘Go,’ ” Patterson said. “I took the chance and came out here. I’d never heard of Midland University. I heard of Nebraska, I heard of Omaha. Not Fremont."

Women's flag football is in its first year of competition in the National Association of Intercollegiate Athletics. The NAIA entered a partnership with the NFL and Reigning Champs Experiences, which operates flag football programs across the country.

It's classified as an emerging sport, meaning there's no NAIA-sponsored championship. Championship status is achieved once there are 40 programs, a threshold flag football could reach in two or three years.

The National Junior College Athletic Association recently announced a similar partnership with the NFL and Reigning Champs and intend to start games in spring 2022.

The sport is played seven on seven on a field 80 yards long and 40 yards wide. There are four 12-minute quarters. It’s 20 yards instead of 10 for a first down. All players are eligible receivers. Players are “tackled” when a defender pulls one of the three flags attached to the ball carrier’s belt.

Midland and 12 other small schools received $15,000 in seed money from the NFL. That's about half of what it costs per year to operate a program, according to the NAIA, but doesn't include cost of scholarships.

Midland offers 33 sports and more than 70% of its students are athletes. The Warriors have 14 flag football players, and all pay more in tuition than they receive in scholarship aid. Athletic director Dave Gillespie said he expects a strong return on investment.

“You’re talking about kids who love playing the sport and probably didn’t think they would have the opportunity to combine it with getting a college degree," Gillespie said. "I think that’s a strong pull."

The 40-year-old Jones, the Midland coach, played small-college football in Kansas and is defensive coordinator for an Omaha women's semipro tackle football team in the summer. His day job is general manager for a pest control company.

“The sport is going to flourish more than what people think,” Jones said. “I was in Tampa for a showcase about a month ago and there were about 1,500 girls there. You come back to the Midwest and people question you, like, ‘Girls play flag football in college? Is that a thing?’ "

In addition to Florida and Nevada, Jones recruited two players from Alaska. Four Nebraskans also are on the team.

“There’s still work to be done, a lot of work getting girls to come in," Jones said. "It’s a continuous grind to get the program where I want it to be and to have a winning program.”

Florida has by far the most girls playing flag football, followed by Nevada (1,900) and California (660), according to the most recent participation numbers provided to the National Federation of State High School Associations. From 2013-18, high school participation increased 27%, to more than 11,000.

Midland is 4-7 after a 34-13 home loss to Ottawa University of Kansas last Friday, a better showing than the 39-0 loss to the Braves a week earlier.

Ottawa is 7-1 and among the best of the new programs. Only one of the Braves' 21 players is from Kansas, and their coaches are former San Francisco 49ers assistant Katy Sowers and her sister, head coach Liz Sowers.

Midland receiver-linebacker Casey Thompson, who grew up 30 miles away in Omaha, played basketball two years at Midland before she decided to try football for the first time this spring.

“You have some players who are high-level players,” she said, “and then there’s the other ones who aren’t quite up there.”

Thompson said she couldn't imagine doing what many of her teammates did — move across the country to attend a small college, sight unseen in most cases, and play flag football.

Maulfair, the receiver and cornerback from Florida, said the pull of the sport was too strong. Her parents and siblings weren't going to hold her back.