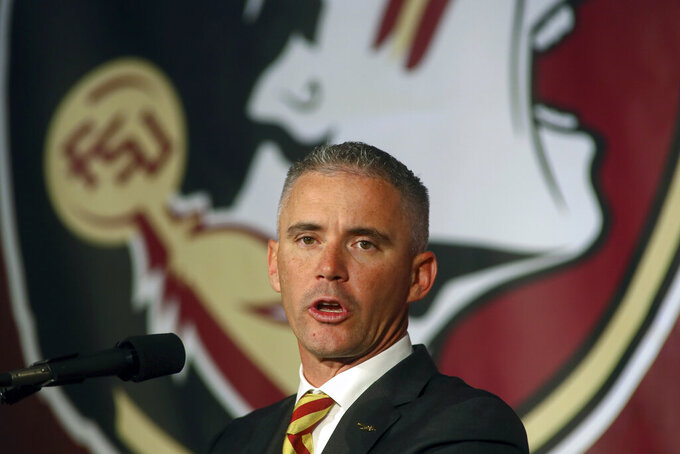 FILE - In this Dec. 8, 2019, file photo, Florida State head football coach Mike Norvell speaks at n during an NCAA college football press conference in Tallahassee, Fla. Norvell has tested positive for COVID-19 and will not coach the Seminoles in-person this week as they prepare for Miami. He released a statement Saturday, Sept. 19, 2020 saying he tested positive Friday. His wife and daughter tested negative Saturday morning, he said. (AP Photo/Phil Sears, File)

Florida State coach Mike Norvell has tested positive for COVID-19 and will not coach the Seminoles in-person this week as they prepare for Miami.

Norvell released a statement Saturday saying he tested positive a day earlier but is feeling fine. He said his wife and daughter tested negative Saturday.

“We will continue to test staff and student-athletes as we have been,” Coburn said in a statement. “We have communicated with Commissioner John Swofford and Miami athletic director Blake James. At this point, based on our testing this week, we have no reason to believe that the Miami game is in jeopardy."

While that game is still on, COVID-19 complications caused more schedule rearrangement Saturday.

Memphis announced that it needed another week off to get through its issues and canceled its nonconference game against Texas-San Antonio that was scheduled for Friday. The Tigers were supposed to play Houston this weekend but that game was postponed after a COVID-19 outbreak among Memphis' players.

Memphis announced it added FCS Stephen F. Austin on Nov. 21 and UTSA said instead of the Tigers it will play Middle Tennessee on Friday.

“I will remain involved remotely as much as possible to help our team continue to prepare," Norvell said. “I’m grateful to the administration, players and staff for their commitment to the protocols we have in place, which have helped us limit contact with others and allowed us to continue moving forward.”

Thomsen has 24 years of college coaching experience and was head coach at Division II Abilene Christian from 2005-11, where he went 51-21.

Florida State lost its season opener at home to Georgia Tech last week and was off Saturday. The Seminoles play at the rival Hurricanes next Saturday.

Norvell, who came to Florida State from Memphis after last regular season, is the first major college football coach known to have tested positive for the coronavirus in season.