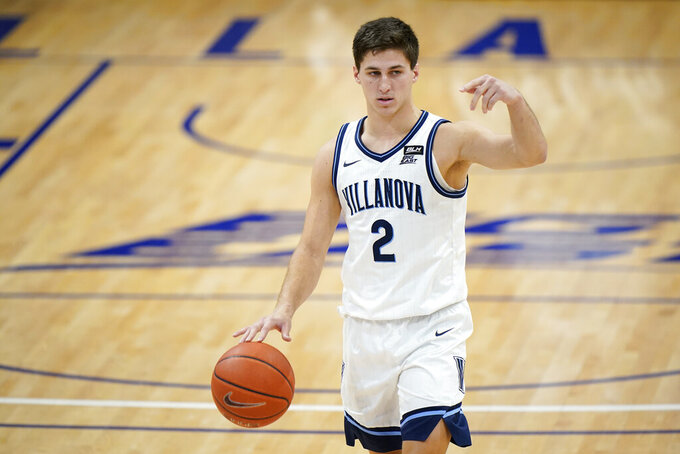 Villanova's Collin Gillespie dribbles down the court during the second half of an NCAA college basketball game against Butler, Wednesday, Dec. 16, 2020, in Villanova, Pa. (AP Photo/Matt Slocum)

The men's basketball game between No. 7 Villanova and No. 17 Virginia scheduled for Saturday night at Madison Square Garden in New York has been canceled.

It was supposed to be a matchup of the past two NCAA champions — and the first college basketball game at The Garden since the Big East Tournament was stopped in March due to the coronavirus pandemic.

Virginia, the 2019 national champion, has had four straight games called off and hasn't played since Dec. 4.

“We’ve worked closely with Virginia on this,” Villanova coach Jay Wright said. “Both schools tried to make this game happen. Due to COVID-19 issues, we will not be able to play.”

Wright said potential replacement games at MSG fell through and Villanova could play a home game instead on Saturday.

The Wildcats beat Butler 85-66 on Wednesday night, improving to 6-1.

The men’s basketball game between Arizona and California Baptist was canceled Wednesday about 90 minutes before the schedule tip due to a positive COVID-19 test.

The cancellation was due to a positive test in Cal Baptist’s program and ensuring contact tracing and mitigation protocols.

The cancellation is Arizona’s fourth due to positive coronavirus tests by the opposing team.

The Wildcats’ next game is Saturday against Sanford in Santa Cruz, California.

The Duke women’s basketball team has paused team activities due to two positive COVID-19 tests and contact tracing within the program’s travel party.

The school announced the move Wednesday as well as the postponement of Sunday’s game at No. 4 North Carolina State as well as Tuesday’s game against UNC Wilmington.

The news comes a week after Duke lost at home to No. 2 Louisville.

Two days after that game, the Atlantic Coast Conference announced that the Cardinals’ home game against North Carolina would be postponed due to positive tests and quarantines within the Louisville program.

Duke’s game at Miami was postponed a day later.

NFL Commissioner Roger Goodell said the league plans to invite vaccinated health care workers to the Super Bowl in Tampa, Florida, as guests of the league.

In a letter to Rob Higgins, president of the host committee for the Super Bowl, that was obtained by The Associated Press, Goodell wrote that he wanted to “honor and thank health care workers for their extraordinary service during pandemic” as well as promote the importance of vaccinations and the wearing of masks in public.

Goodell added in the letter: “We all know that over the past year, these frontline workers have put their own lives at risk to the benefit of society and we owe them our ongoing gratitude. We also know that they will remain essential for months to come to treat those who are ill and administer vaccines. We hope that in some small way, this initiative will inspire our country and recognize these true American heroes as we look forward to a better and healthier year.”

The Super Bowl is scheduled to be played on Feb. 7.

The Yellow Jackets postponed games against Miami on Thursday and Central Florida on Monday. Makeup dates have not been determined.

Georgia Tech says it will resume team activities when standards meet ACC medical advisory group guidelines. The Yellow Jackets are 4-1 overall and 2-0 in the ACC.

Georgia has ended its search to find a replacement for Vanderbilt, which had been scheduled to visit Athens on Saturday.

The game was canceled when Vanderbilt’s roster fell below minimum requirements set by the Southeastern Conference’s COVID-19 protocols.

It would have been Senior Day for No. 8 Georgia. Instead, athletic director Greg McGarity says Georgia will seek another way to honor its seniors and the Bulldogs’ focus will switch to a bowl game.

Duke is adhering to the outlined protocols within the ACC Medical Advisory Group report. No makeup date was given.

Due to varying COVID-19 protocols among the four schools and their respective basketball conferences, the matchups for Saturday’s CBS Sports Classic in Cleveland featuring North Carolina, Kentucky, UCLA and Ohio State have been changed.

The No. 22 Tar Heels will face the Wildcats at 2 p.m., while the No.20 Buckeyes and Bruins will tip off at 4:15 p.m. in Rocket Mortgage FieldHouse.

Organizers said the change was to “more closely align COVID-19 testing protocols between the competing programs and their respective conferences.” The schools come from the ACC, SEC, Big 10 and Pac-12.

The four schools have combined for 26 national championships and 65 Final Four appearances.

Kansas State has paused all football activities and withdrawn from bowl consideration after an outbreak of positive tests and contact tracing procedures would not have left the Wildcats with enough players to compete in a game.

The First Responder Bowl was the likely destination for the Wildcats, who beat then-No. 3 Oklahoma on the road early in the season but slid to a 4-6 finish after losing quarterback Skylar Thompson and several other players to injuries.

Kansas State lost its last five games but was in line for a bowl game because it finished seventh in the Big 12.

Second-year coach Chris Klieman called it “a bittersweet ending to the season,” but he also called it “nothing short of a miracle” that the Wildcats were able to play 10 games amid the COVID-19 pandemic.

Two soccer games in Germany’s second division have been called off after a staff member at Würzburger Kickers tested positive for the coronavirus.

The club says its entire team has been ordered by local health authorities to isolate “until further notice.”

The decision forced the postponement of Würzburg’s games on Wednesday against St. Pauli and on Saturday against Darmstadt.