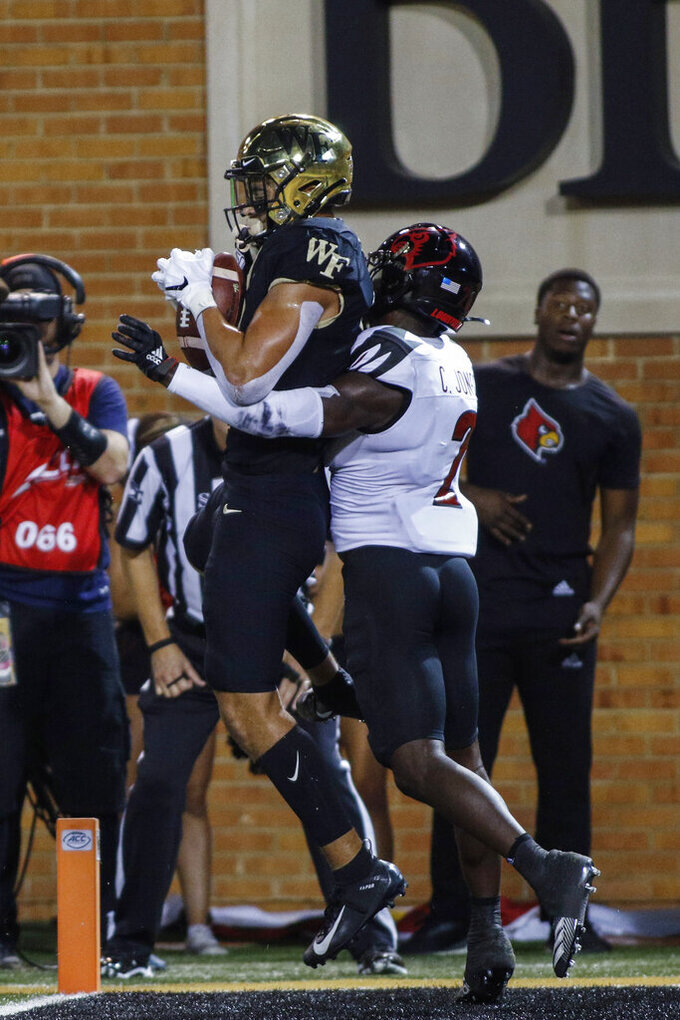 It added up to one of the highest-scoring games in Atlantic Coast Conference history — and a signature victory for the Cardinals' new coach.

Louisville held off No. 19 Wake Forest's late rally to upset the Demon Deacons 62-59 on Saturday night in the second-highest-scoring game in ACC history.

"All praise to the offense. They came out and just did everything they needed to do," Louisville nose tackle G.G. Robinson said. "We won. It's still tough to look at 600 yards of offense we gave up. But a win is a win so it is a big win over a big-time opponent and we can definitely see why they're the No. 1 offense in the ACC."

"It's going to help us to know that we can fight and compete with anybody out there," first-year coach Scott Satterfield said.

Wake Forest (5-1, 1-1) trailed 52-31 with less than 6½ minutes remaining before rallying, with backup Sam Hartman — the starter for most of 2018 — throwing two touchdown passes in 35 seconds. He hit Scotty Washington from 22 yards before his 21-yarder with 3:37 left to Jack Freudenthal — who recovered the onside kick that set up his scoring catch.

Conley took a fourth-and-1 keeper 41 yards for a touchdown to give the Cardinals a 62-52 lead with 2:52 remaining — but that left plenty of time for the Demon Deacons to counter, with Hartman leading them 92 yards in seven plays and scoring on a 1-yard keeper with 1:10 remaining.

The onside kick squirted downfield, Tutu Atwell came away with it in a pileup with 1:05 left and the Cardinals ran out the clock to seal their first big victory under Satterfield.

"We can talk all we want about the last play, but the bottom line is that if we show up ready to play today, it never comes down to that," said Wake Forest coach Dave Clawson, whose team fell behind 28-7 one play into the second quarter.

"We just showed up and laid a dud in the first quarter," he added.

Micale Cunningham threw a 55-yard touchdown pass to Seth Dawkins and a 9-yarder to Atwell before leaving in the second quarter with an injury. Conley took over and finished 12 of 18 for 196 yards with touchdowns of 15 and 50 yards to Dez Fitzpatrick.

"Every time they needed a play," Clawson said, "they got it."

Jamie Newman threw three touchdown passes to Sage Surratt — covering 12, 3 and 47 yards — and finished 24 of 41 for 251 yards, but was intercepted twice.

Louisville: The Cardinals took yet another huge step toward putting the misery of their 2-10 finish in 2018 behind them. They earned their first victory over a Top 25 opponent since their Lamar Jackson-led 63-20 rout of then-No. 2 Florida State in 2016, and their first against a ranked team on the road since Charlie Strong and Teddy Bridgewater won at No. 24 West Virginia in 2011.

Wake Forest: So much for the possibility of two unbeatens facing off in Death Valley when Wake Forest visits No. 1 Clemson on Nov. 16. The Demon Deacons' first appearance in the Top 25 since 2008 figures to be undone by a series of mistakes and an inability to keep up with the speedy Cardinals. Their seven-game winning streak — which dated to last season and matched the 1944 team's as the longest in school history — also is history.

That big yardage total doesn't include the three big field-flipping returns by the Cardinals. In addition to Hall's big return, he also brought the second-half kickoff 83 yards to the Wake Forest 15 to set up Conley's first touchdown pass. And Atwell had a 50-yard punt return. Wake Forest's coverage team struggled so badly that they opted for short, high kickoffs. "Our special teams were atrocious tonight," Clawson said. "We didn't even trust ourselves to cover it."

It certainly seems like Wake Forest will drop a few spots — if not all the way out of the poll — but this result also might benefit Satterfield's old school: Appalachian State (5-0), which was three spots back of the Top 25 last week. Satterfield was a quarterback for the Mountaineers in the 1990s and spent six years as their head coach before taking the Louisville job before this season. "More importantly, it's helping our team," Satterfield said. "But anything to help the Mountaineers as well."

Cunningham was hurt after he took off toward the left sideline early in the second quarter. Nasir Greer hit him low, causing the quarterback to do a complete head-over-feet flip and lose the ball, with Traveon Redd scooping it up and returning it to the Louisville 4. Cunningham briefly entered the team's sideline medical tent, then quickly returned to throw on the sideline but never got back in the game because Satterfield said he wasn't 100% healthy.

Louisville: Plays host to No. 1 Clemson on Saturday.