New Mexico teams adjusting to long-term life on the road 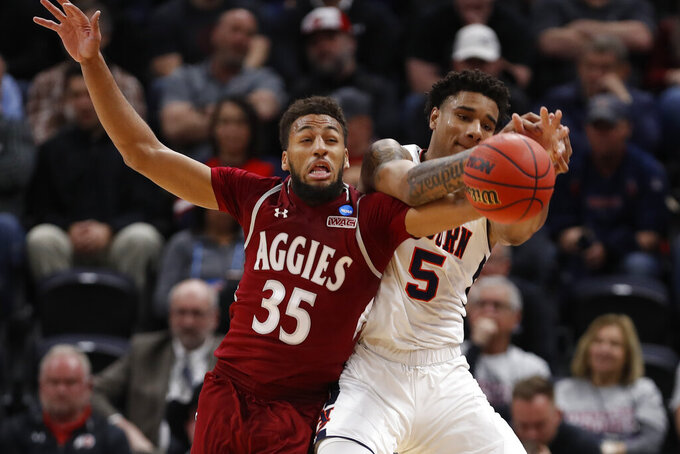 FILE - In this Thursday, March 21, 2019, file photo, New Mexico State forward Johnny McCants (35) and Auburn forward Chuma Okeke (5) battle for the ball in the first half during a first round men's college basketball game in the NCAA Tournament in Salt Lake City. Coronavirus restrictions in New Mexico make it impossible for the schools there to play their seasons. McCants and his New Mexico State teammates have settled into a regular routine less than a week after the team temporarily relocated to Phoenix, amid the pandemic. (AP Photo/Jeff Swinger, File)

PHOENIX (AP) — Johnny McCants and his New Mexico State teammates have settled into a routine less than a week after the team temporarily relocated to Arizona.

The Aggies lift weights in the morning, practice in the afternoon and watch film before dinner. The rest of the time is spent in remote classes and doing schoolwork or hanging out to play video games, maybe hitting the pool or the hot tub at Arizona Grand Resort & Spa in Phoenix.

Need something from outside the bubble — fast food, maybe a razor — all they have to do is ask and someone will bring it to them.

The difficult part: being so far from home.

“I was raised in (Las) Cruces and being around my family the whole time, so being away from them for a couple of months is probably going to be tough,” said McCants, a senior forward. “But a little adversity is never going to hurt someone.”

Coronavirus restrictions in New Mexico have made it impossible for the schools there to play their seasons. State regulations prevent gatherings of more than five people, wiping out practices. A 14-day quarantine period for anyone entering New Mexico ends the hope of having any games.

To get around the restrictions, the biggest moneymaking sports at New Mexico's two largest universities took a drastic step.

New Mexico's football team was the first to temporarily relocate, moving from Albuquerque to the Las Vegas area to practice and play.

New Mexico State's men's basketball team opted to move from Las Cruces to Phoenix, while the women's team will practice in Tucson and play at a variety of sites.

New Mexico's two basketball teams headed to Texas: the men in Levelland, the women in Amarillo and Canyon. The Aggies football team stayed home after the school opted to not play fall sports due to the state's restrictions.

The moves were not as simple as, hey, let's go play someplace else.

Relocating takes weeks of planning to make sure everyone in the travel party is comfortable and safe. The move didn't just involve the players and staff, but also massive loads of equipment, from weights and football shoulder pads to white boards and Gatorade buckets.

It takes time to settle into a routine, adjust to being in a temporary home. It's also less comfortable in some ways, with no cushy locker room, large meeting rooms or access to high-tech training rooms.

“It's character building in a lot of ways,” New Mexico men's basketball coach Paul Weir said. “It's kind of getting used to an isolated, very small space kind of life. I think it's something you learn from and you just have to find what those positives happen to be.”

New Mexico's football team went straight to Las Vegas after opening at San Jose State to avoid having to quarantine in New Mexico. The Lobos brought weights and other training equipment with them, and set up study rooms inside a bubble at the Hilton Lake Las Vegas Resort & Spa. They're practicing and playing at Sam Boyd Stadium, formerly the home to UNLV football, while trying to adjust.

Isolation on the road together does have its benefits.

At home, players and coaches see each other for practices, meetings and film sessions. Free time is just that for the players.

Being in a bubble limits what and where the players can go, so there's more time for meetings or even interactions with coaches in hotel common areas.

“It’s pretty busy because we still keep the same schedule as we would if we were in Albuquerque, but the thing is now that we just get extra meeting times with the coaches,” Lobos quarterback Tevaka Tuioti said. “We’re seeing them 24/7. It’s not like every day seeing them half the day.”

It's also been a great bonding experience, like NFL teams that travel for training camp.

The players are already close and spend plenty of time with each other at home. Bubble life allows them to bond even more, with more time for epic video game battles, dipping in the hot tub or hanging around on the grounds.

“It's been a great experience for us as a team, being able to stay together all basically in one spot,” McCants said. “We see each other every day, it builds our team chemistry even more. Being able to practice and not have to travel so far and having everything so close is just a good opportunity for us.”