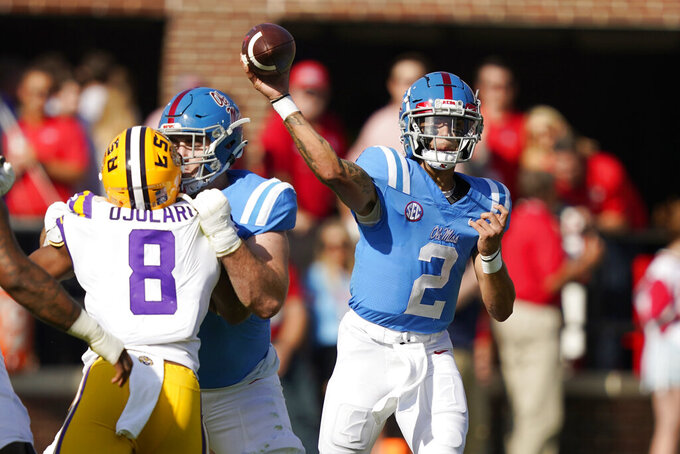 Things to watch in Week 9 in the Southeastern Conference:

No. 10 Mississippi (6-1, 3-1) visits No. 18 Auburn (5-2, 2-1) in the SEC's only Top 25 matchup, while six teams take a break Saturday. The Rebels are sporting their first Top 10 ranking since the final poll of 2015. The Tigers, who are slight favorites, have won four straight meetings but the past two games have been decided by a combined 13 points. Florida (4-3, 2-3) and No. 1 Georgia (7-0, 5-0) meet in Jacksonville but the Gators' struggles have taken some of the shine off this SEC East rivalry game. It's the first time since 2017 that the game won't be a matchup of Top 10 teams. The Bulldogs are two-touchdown favorites.

Florida's offense was dominant against the Bulldogs defense last season, but Georgia's defense has dominated everyone so far this season. The Gators' Kyle Trask torched the Bulldogs for 474 passing yards, the second most by a Georgia opponent. Good luck repeating that with a new cast of offensive playmakers against the nation's top defense, led by defensive lineman Jordan Davis. The Gators are still ninth in total offense and No. 4 in rushing. The Bulldogs lead the nation in scoring and total defense. They've allowed 46 points all season, while Florida gave up 49 to LSU. It's the first time Florida has faced two No. 1 teams in a regular season, having lost to then-top-ranked Alabama 31-29 on Sept. 18.

Mississippi State is trying to continue the SEC West's advantage of the teams from the East, facing No. 12 Kentucky. Oddsmakers are't really calling the Bulldogs longshots, since Kentucky is only a 1.5-point favorite against the SEC's most pass-happy team. But outside of Georgia the East Division teams haven't fared well lately against the West. The West won the three head-to-head matchups with the East last weekend by a combined 97 points.

Alabama, which has an open date, has scored a touchdown on its opening drive in each of the past six games. ... Ole Miss leads the nation in fourth down attempts and conversions, successful on 23 of 30 attempts. ... Auburn's the only SEC team with three players who have at least four sacks: Eku Leota, Derick Hall and Colby Wooden. ... No. 12 Kentucky and Mississippi State enter Saturday night's meeting in Starkville deadlocked at 24 wins apiece in the series. The home team has won each of the last six meetings. ... Vanderbilt and Missouri are the only remaining SEC teams without a league win. That changes when they face Saturday.

Kentucky RB Christopher Rodriguez Jr. is leading the SEC in rushing with 110.7 yards per game, totalling 775 yards and five touchdowns. Rodriguez and the Wildcats offense are trying to rebound from the Georgia game. He carried just seven times for seven yards. The Wildcats netted just 21 yards on 27 rushes after giving up three sacks for minus-14.