No. 14 Iowa State looks to slow down rushing 3-0 Baylor 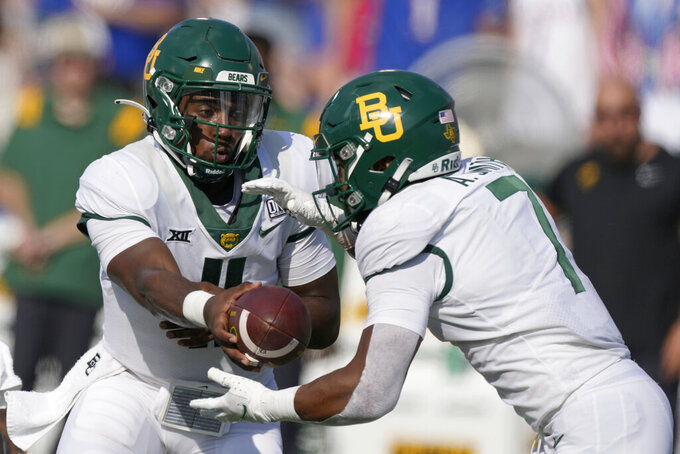 Line: Iowa State by 6 1/2, according to FanDuel Sportsbook.

Iowa State plays its Big 12 opener after bouncing back from a disappointing home loss to Iowa with a 48-3 win last week at UNLV for its largest winning margin on the road since 1923. Baylor looks to start 4-0 and double its win total from coach Dave Aranda's debut in the pandemic-altered 2020 season when the Bears went 2-7. The Bears are coming off a 45-7 win over Kansas in their league opener.

Iowa State's defense against Baylor's running backs. The Cyclones have held four consecutive opponents under 100 yards rushing for the first time since 1944, and lead the nation in total defense at 194 yards per game. Baylor has already rushed for 964 yards and 11 TDs in three games, surpassing last year's season totals of 813 yards and eight TDs in nine games. Abram Smith is the first Bears running back with three consecutive 100-yard games since 2015.

Iowa State: Preseason AP All-America running back Breece Hall tied a Big 12 record last week with a rushing TD in his 15th consecutive game (Corby Jones at Missouri from 1997-98). Hall's 37 career rushing TDs are one short of the school record.

Baylor: Jalen Pitre has five tackles for loss, an interception, a forced fumble, a pass breakup and two quarterback hurries already this season. He has 15 tackles, 12 of them solo stops.

Iowa State and Baylor are the Big 12's top two teams in scoring defense and total yards allowed. ... The Bears held Kansas to 166 yards, the fewest they have ever allowed in a Big 12 game. ... Iowa State's defense has allowed only one offensive touchdown in the second half over its last eight games. ... Cyclones QB Brock Purdy has a 19-7 record against Big 12 teams, and is the only quarterback in school history with a win over every other league team.