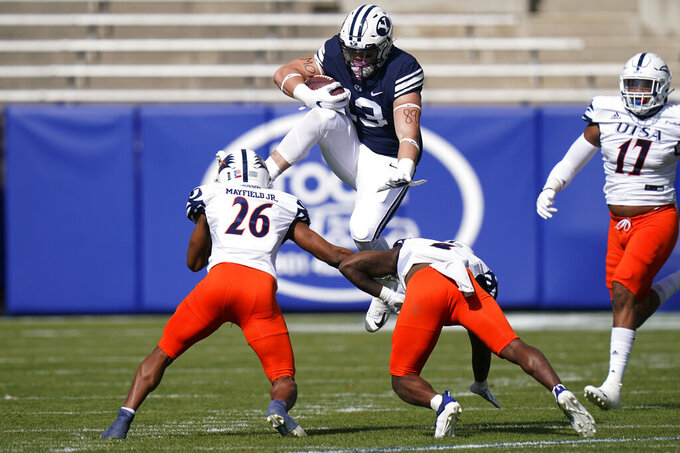 PROVO, Utah (AP) — Zach Wilson threw for 292 yards and two touchdowns and Tyler Allgeier rushed 116 yards and another score to lead No. 15 BYU past UTSA 27-20 on Saturday.

Allgeier posted his second 100-yard game of his career to help rescue an inconsistent BYU offense.

Lowell Narcisse threw for 229 yards and two touchdowns – all after halftime – on 17-of-20 passing to lead the Roadrunners. UTSA (3-2) became the first opponent to give BYU a four-quarter test, but fell short of earning the upset, despite averaging 7.6 yards per play in the second half.

BYU trailed for the first time this season when UTSA took a 3-0 lead on a 39-yard field goal from Hunter Duplessis in the first quarter.

The Cougars, who came in averaging 49 points per game, short circuited a couple of times in the opening quarter, fumbling at the UTSA 10 and failing to convert on fourth-and-6 from the Roadrunner 40.

It was first quarter this season that BYU did not score a touchdown.

Neil Pau’u finally broke the ice when he snagged a 4-yard tiptoe catch from Wilson on fourth down to put the Cougars ahead 7-3. Lopini Katoa hauled in a short play action pass and raced 11 yards untouched into the end zone to extend BYU’s lead to 14-3 late in the second quarter.

Narcisse gave the Roadrunner offense life after halftime. His first touchdown pass, a 32-yarder to Zakhari Franklin, narrowed the Cougar lead to 21-13 less than a minute into the fourth quarter.

UTSA drove into BYU territory a second time with a chance to tie the game, after forcing a three-and-out, but Gabe Summers sacked Narcisse for an 8-yard loss on third down to force a punt.

The Cougars took 6:11 off the clock on 12 play, 80-yard scoring drive to give themselves some breathing room. Allgeier capped the drive by hurdling a defender and sprinting into the end zone on a 6-yard run, giving BYU a 27-13 lead with 2:18 remaining.

UTSA made it a one-possession game again on Brennon Dingle’s 34-yard catch with 1:01 left. The Roadrunners forced a punt, but BYU was able to run out the clock following a roughing the punter penalty with 15 seconds left.

UTSA: For much of the game, the Roadrunners found a way to slow down BYU’s powerful offense. UTSA could not capitalize enough after struggling to move the chains on too many drives, even after making a change at quarterback.

BYU: The Cougars shook off early struggles at finishing drives by relying on tough defense. They held the Roadrunners to 101 yards in the first half and came up with crucial stops when UTSA tried to mount a fourth quarter comeback.

BYU may not experience much upward movement in the AP Top 25 after struggling with UTSA.