No. 19 Iowa looks to stop slide when it meets Northwestern 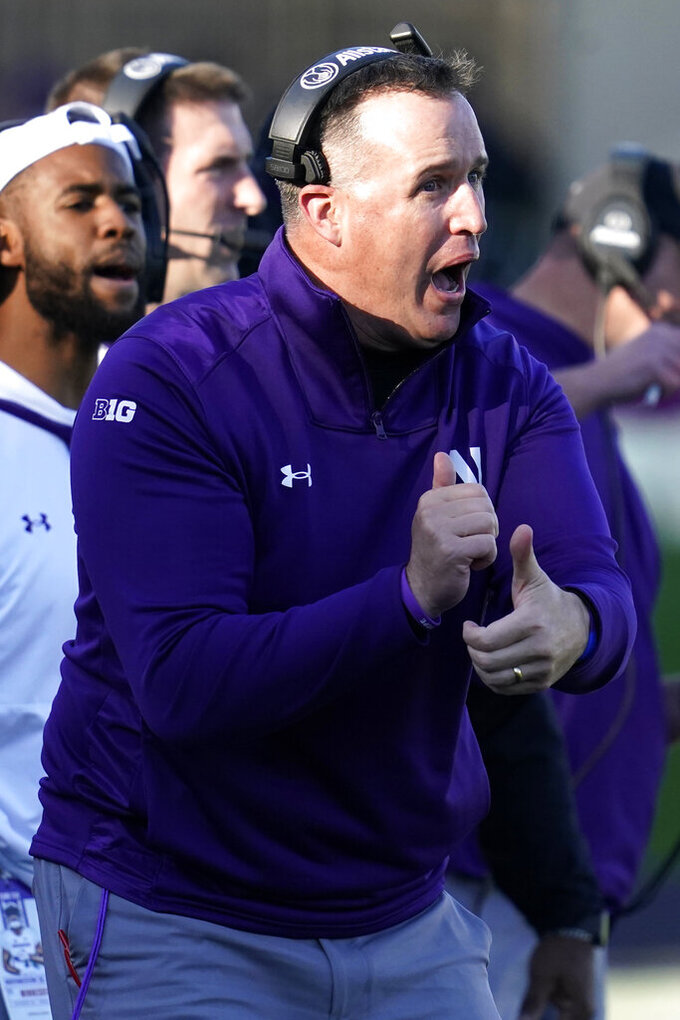 Northwestern head coach Pat Fitzgerald shouts to his team during the first half of an NCAA college football game against Minnesota in Evanston, Ill., Saturday, Oct. 30, 2021. (AP Photo/Nam Y. Huh)

Iowa has dropped two straight since opening 6-0 for the third time in coach Kirk Ferentz's 23 seasons and fallen 17 spots from No. 2 in the AP poll. The Hawkeyes were in the College Football Playoff discussion following a win over then-No. 4 Penn State at Kinnick Stadium, only to get outscored a combined 51-14 in stumbling at home against Purdue and at Wisconsin. Northwestern coach Pat Fitzgerald pulled quarterback Ryan Hilinski in the Minnesota game, and Andrew Marty completed 10 of 16 passes with a pair of touchdowns in his first appearance since Sept. 18.

Iowa C Tyler Linderbaum against Northwestern's defensive line. The All-America candidate will try to open holes for RB Tyler Goodson and get Iowa's struggling ground game going against a defense having difficulties against the run. The Hawkeyes rank 118th in the nation and 13th in the Big Ten in rushing. Northwestern is 126th against the run nationally and last in the conference.

Iowa: Goodson. This could be a bounce-back game for Goodson after he ran for just 27 yards on 13 attempts against Wisconsin. Iowa's leading rusher has 95 yards on 25 carries the past two games and ranks eighth in the conference averaging 76.6 yards this season.

Northwestern: S Brandon Joseph. The 2020 All-American remains a force in the backfield even if he is not picking off passes at the same rate as last year. He has two interceptions after finishing with six in nine games during the pandemic-shortened season, including a pair in last year's win over the Hawkeyes.