No. 2 Hawkeyes out to extend win streak when Purdue visits 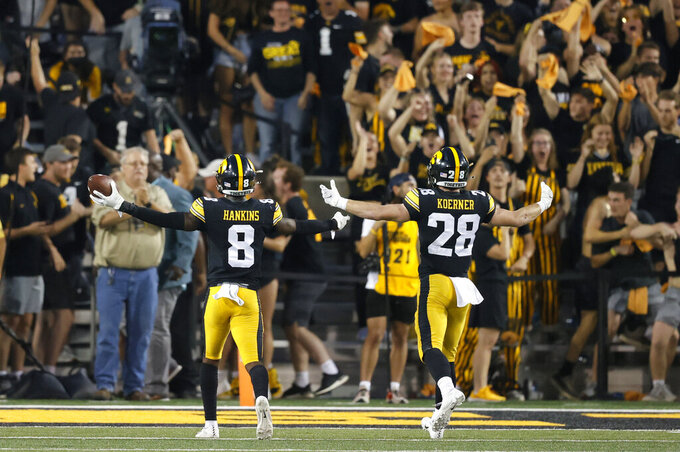 Iowa has its highest ranking since 1985 after its come-from-behind win over Penn State, and now the Hawkeyes must guard against a letdown before their open date next week. The fact Purdue has won three of the last four meetings should get the Hawks' attention. The Boilermakers have the Big Ten's No. 2 passing attack, but they've scored only 39 points over their last three games.

Whoever plays QB for Purdue vs. Iowa's defense. Jack Plummer started the first four games, Aidan O’Connell got the nod in the fifth. Whoever starts will be going against an aggressive defense that leads the nation with 16 interceptions and 20 takeaways.

Purdue: WR David Bell has caught 26 passes for 318 yards and four touchdowns in two games against Iowa. He comes into this game ranked first in the Big Ten with an average of 109 yards receiving per game, but he has only three touchdowns.

Iowa: CB Matt Hankins is coming off one of the best games of his career and figures to line up against Bell with fellow corner Riley Moss out because of injury. Hankins made a huge fourth-down tackle and intercepted a pass, both in the final quarter against Penn State, and is the Big Ten defensive player of the week.

Iowa's 12-game win streak is its longest since it won 13 in a row over 2008-09. ... Iowa's Tory Taylor has had 20 of his 40 punts downed inside the opponent's 20-yard line. ... Purdue coach Jeff Brohm missed the 2020 game against Iowa after testing positive for COVID-19. ... The last three matchups in the series have been decided by one score, with Purdue winning two of them. Ten of Purdue's last 15 games have been decided by seven points or less.