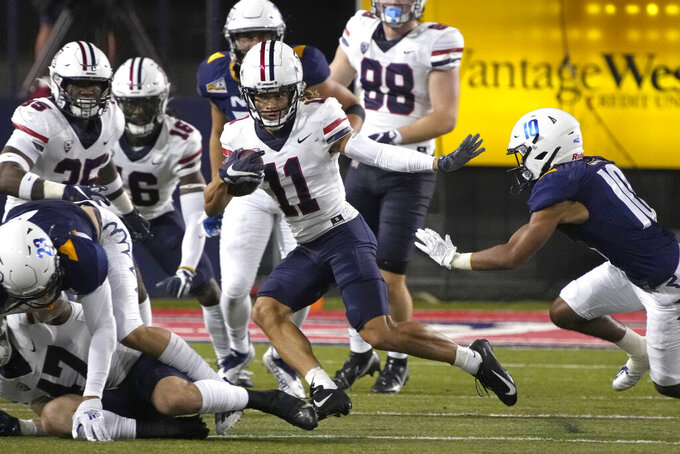 Heading into the Pac-12 season, the No. 3 Oregon Ducks are mostly happy with where they're at.

And why wouldn't they be? Oregon put Ohio State away in Week 2 and survived the nonconference season at 3-0.

Now the idea is to improve on the details.

“We’ve started fast and we’ve closed out games well, but somewhere in the middle we’re not up to our standard and we’ve been focusing on that and trying to get the result that we want by focusing on the process,” coach Mario Cristobal said. "But all in all, we’re in a solid position and one that we have the opportunity to improve on on Saturday.”

Next up is Arizona, which fared terribly during its nonconference slate, falling to BYU, San Diego State and Northern Arizona.

In fact, Arizona (0-3, 0-0 Pac-12) has lost a school-record 15 straight games, most in FBS, heading into Saturday night's meeting at Autzen Stadium. The Ducks are four-touchdown favorites.

“No one thought this was going to be an easy turnaround just because of the fact that we’re able to catch a football from 600 feet in the air, or because we were able to have incredible energy and enthusiasm in the offseason, or have a great bunch of recruits that want to be a part of our program," Fisch said. "We knew that this season was going to be a great challenge for us and our goal is, each week to get better.”

Oregon (3-0), the two-time defending Pac-12 champion, is the lone unbeaten team left in the conference. The Ducks have a 14-game unbeaten streak at Autzen.

The biggest question for Oregon heading into the week was the health of quarterback Anthony Brown, who left Saturday's victory over Stony Brook at halftime after he was sacked twice to end the second quarter.

Cristobal said this week that the sixth-year senior would be back against the Wildcats.

Meanwhile, Ducks defensive end Kayvon Thibodeaux remains day-to-day with an ankle injury. Freshman Brady Swinson, who started for Thibodeaux against the Buckeyes but missed the game against Stony Brook with an unspecified injury, is doubtful.

Mase Funa and Keith Brown, who also sat out last week's game after injuries against Ohio State, are both available, Cristobal said.

Plummer started last weekend's game against Northern Arizona, throwing for 191 yards and a touchdown but he also had a pair of interceptions. McCloud was inserted in the fourth quarter, throwing for 66 yards and a score. Cruz started the Wildcats' first two games.

What Fisch doesn't want is a revolving door.

“It’s a very frustrating situation being in this quarterback derby,” Fisch said. “You don’t want to get to the point where it’s like, how do you ever get into that rhythm?”

Arizona will be without defensive end Mo Diallo and safety Jaxen Turner for the first half of the game at Oregon because of targeting calls last week in the loss to NAU.

Fisch pointed to examples of teams that struggled in transitioning to a new head coach, including Arizona coach Adia Barnes, an alum who led the Wildcats to a berth in the NCAA Tournament final in the spring.

Barnes also struggled early on at Arizona, going 6-24 in her second season. Just three years later, she had the Wildcats in the championship game.

Similarly, Fisch is looking at the big picture.

“We’re gonna try to emulate and replicate what Adia Barnes did,” Fisch said.

Arizona has surprised Oregon before.