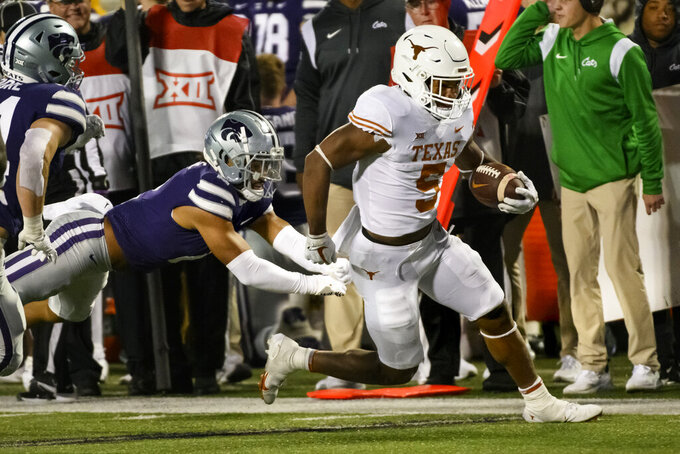 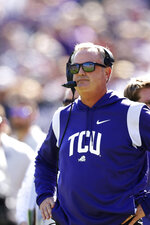 AUSTIN, Texas (AP) — The big picture is laid out before No. 4 TCU, and the Horned Frogs have everything to play for.

They are undefeated and in striking range of clinching a berth in the Big 12 title game. Even bigger, they are No. 4 in the College Football Playoff rankings, meaning a bid for a national title could cap a remarkable debut season for coach Sonny Dykes.

Standing in the way? Texas. The No. 18 Longhorns would like nothing better than to derail Max Duggan and the Horned Frogs and announce their own resurgence in the Big 12.

Duggan has been the engine in a remarkable turnaround season for the Horned Frogs (9-0, 6-0 Big 12), who have complemented one of the explosive offenses in the country with the grit needed to rally from behind several times this season.

“We haven’t always won pretty. There’s been some struggles. We’ve had to make some second-half comebacks,” Dykes said.

Win Saturday night and TCU clinches a berth in the Big 12 title game. Even if they lose, the Horned Frogs still own the inside track since every other team in the league has at least two losses.

The Horned Frogs do not have a kind playoff history. The program felt snubbed in 2014 when the Horned Frogs were 11-1 and tied for the Big 12 title, only to get left out of the final playoff rankings.

TCU was No. 3 in the CFP rankings going into the final weekend and closed with a 55-3 rout of Iowa State. Still, the Horned Frogs were passed by Ohio State, which beat Wisconsin 59-0 in the Big Ten title game that day. The Buckeyes went on to win the CFP title.

The Big 12 hasn't had an undefeated champion since Texas in 2005.TCU will likely need to be perfect to get to the playoff.

Texas (6-3, 4-2) can't be perfect but they can play spoiler and sweeten their own conference title hopes in coach Steve Sarkisian's second season.

Sarkisian endured a miserable 5-7 debut in 2021 and Texas still struggles to finish games. But last week's 34-27 win at Kansas State could be a huge boost for a team led by Bijan Robinson, the Big 12's leading rusher.

“We’ve got more work to do, and I think our guys recognize that. They’re hungry. It’s always good when you get a win like that and then here comes a top-five team coming in to your own stadium on a Saturday night who’s in first place in your league," Sarkisian said.

Former TCU head coach Gary Patterson, who turned the program into a Big 12 power but was pushed out last season as the Horned Frogs faded, landed at Texas this season as a special assistant. His job is to scout opposing offenses and his fingerprints will figure to be all over the Texas game plan Saturday. Patterson was regarded as a defensive guru at TCU and he'll be savoring the chance to shut down his former team.

The game features two of the best running backs in the country. Robinson's combination of speed and elusiveness can leave defenders spinning on their heels. TCU's Kendre Miller has chewed up defenses in the second half. Robinson's 1,219 yards lead the Big 12. Miller's 1,009 yards rank second. Both have 12 rushing touchdowns.

TCU has thrived in the second half this season. Texas has not. The Longhorn surrendered late leads in losses to Alabama, Texas Tech and Oklahoma State and nearly did it again last week. Texas has scored 31 points in the first half of the last two games and just three points after halftime. TCU trailed both Oklahoma State and Kansas State by double digits before rallying to win.

TCU has a special scoring weapon in punt returner Derius Davis. His two punt returns for touchdowns this season, including one last week against Texas Tech, make him the TCU career record holder with five. Texas has three punt blocks this season.

The Horned Frogs will have to play the first half without defensive team captain Dee Winters. The senior linebacker got a targeting penalty in the second half against Texas Tech last week.