No. 5 Hawkeyes face Kent State in matchup of top defenses 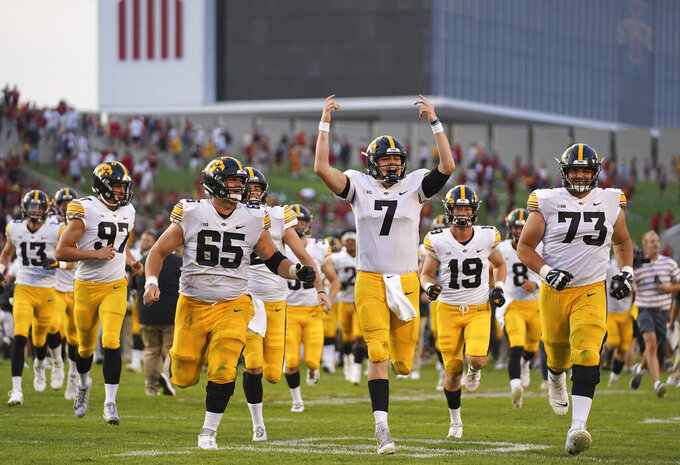 The Hawks (2-0) go into their home game against Kent State on Saturday ranked No. 5 after knocking off Top 25 opponents Indiana and Iowa State.

“Right now there’s probably a small handful of teams that are worthy of being ranked high,” Ferentz said. “I think after whatever it is — three, four teams — it’s a jump ball for a lot of teams.”

Iowa is the only team in the nation with two wins over ranked opponents, and the Hawkeyes have not been higher in the Associated Press poll since they were unbeaten and No. 4 in late November 2015.

The schedule softens up the next two weeks with home games against Kent State (1-1) and Colorado State.

“To be honest with you, we're not taking anyone lightly,” cornerback Riley Moss said.

This week's game matches two of the top turnover-generating defenses.

“They always seem to be in the right place,” Iowa tight end Luke Lachey said.

Iowa is second in interceptions with six and fifth in turnover margin at plus-5. The Hawkeyes have scored 37 points off the seven turnovers. Moss had two interception returns for touchdowns against Indiana and linebacker Jack Campbell scored off a fumble recovery against Iowa State.

“We're trying to keep the outside noise outside,” Moss said.

That's what Ferentz is hoping to do with the team's high ranking.

“Right now it’s really more about speculation, projection," Ferentz said. "But I know that. Hopefully our players understand that. We’ve won two games. We’re thrilled to death to be 2-0. It’s the best you can be. But it means nothing.”

Iowa offensive lineman Kyler Schott is expected to play in his first game of the season. Schott, who was expected to be the starting right guard for the Hawkeyes, broke his foot in an accident on his family's farm over the summer. He practiced last week.

Schott made six starts in 2019 and started twice last season.

Kent State is 0-17 against opponents from the Big Ten. But Iowa receiver Charlie Jones, who played at Buffalo in 2018, said teams from the Mid-American Conference are capable of holding their own.

“I think the MAC gets kind of a bad rap at times,” Jones said. “There's players in that league, that conference, that are just as good as players in the Big Ten and SEC. We're going to prepare the same way we always do. We're not going to go easy just because we're playing a MAC team.”

Iowa is 24-4 against MAC opponents, including a streak of five consecutive wins. The Hawkeyes' last loss to a MAC team was a 30-27 defeat to Northern Illinois in 2013.

“The best part," Ferentz said, "is he has no idea what he’s doing half the time in terms of football. He does as a player. The rest of the stuff, it’s an adventure ride for him. He’s enjoying life. He has such a good approach. Just really underwhelmed by all of it, what he’s doing. He just goes out and plays.”

The Hawkeyes are on an eight-game winning streak since last season and have won 13 consecutive nonconference games, the second-longest active streak in FBS play behind Minnesota (20). Iowa's last nonconference loss was a 30-3 defeat to Florida in the 2017 Outback Bowl.